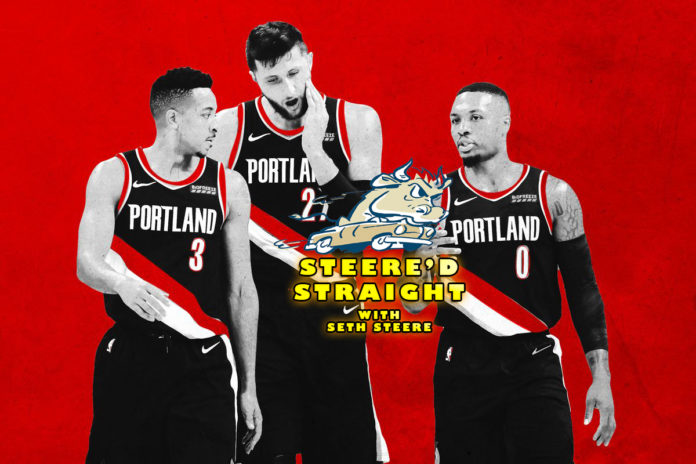 Blazer fans spent another summer waiting for GM Neil Olshey to make a move for a star to be added to the roster. When the offseason ended, and the team was comprised of nearly all the same players, many fans began to worry.

No need to fret. For once, it seems Olshey had plans going into the offseason – build depth on a squad that hasn’t scored many points outside of the starting lineup. This year tells a different tale.

With the addition of Nik Stauskas and the real splash brother, Seth Curry, Portland added shooting to its bench. It gives the Blazers the ability to spread the floor when star point guard Damian Lillard and CJ McCollum are resting.

Stauskas showed his addition paid off when he exploded for more than 20 points in a season-opening victory over the Lakers. He started the first half 4-for-4 from deep to help Portland build momentum.

The Blazers also had a big win against the Rockets, and, at 7-3, own the third-best record in the West. While early, be excited if you’re a Portland fan.

Lillard is averaging a career-high of just over 30 points per game. He seems to be on a mission, proving he deserves to be in the conversation as the league’s best point guard. He has led the Blazers to the playoffs every year since LaMarcus Aldridge went to San Antonio, and looks to continue to do so this year.

Lillard’s counterpart, McCollum, has struggled with his shooting, which is under 40 percent. With the addition of Stauskas and Curry, there is more wiggle room for McCollum, but he must find his shot for the Blazers to continue to be successful.

Down low, Portland extended center Jusuf Nurkic’s contract during the offseason, giving him another four years, and he has certainly impressed.

Nurkic struggled at finishing last year, but has improved, finding his touch near the rim. He was a defensive liability at times, having trouble switching in the pick-and-roll as most guards could beat him to the basket. He has improved his speed, which should allow him to see more minutes.

Second-year player Zach Collins, who the Blazers and fans are most excited about, has come out strong. He is leading the team in blocks with two a game and his shot looks to have come around.

Collins didn’t miss a field goal attempt in the Blazers’ game against the Magic. He is shooting 50 percent from beyond the arc and above 60 percent from the field. Look for Collins to see more and more playing time if he keeps up the pace.

Collins’ defensive instincts are what led him to be a lottery pick last year and have certainly paid dividends. He struggled offensively last year, but has made progress. He could be the piece the Blazers were missing, giving them a big man who can spread the floor.

The biggest improvement, however, has been big boost from the bench. Before, when the starting guards came off the floor, so would the offense. Things are different with Stauskas and Curry. The Blazers are second in bench scoring behind the Clippers.

While you can thank Stauskas and Curry for the bench improvement, Jake Layman and Caleb Swanigan are also coming into their own. Layman was able to get the start in the season opener while Moe Harkless nursed an injury.

Portland has taken the unconventional way of building, as most teams try to add superstars through free agency. The Blazers have relied on their ability to develop from within. Keeping their role players around builds trust and chemistry.

Harkness, Al-Farouq Aminu, and Evan Turner have been with the team the last two years and all have played key roles. They must continue to do so if the Blazers hope to remain successful.

Aminu is a great defender, with an improving deep shot and seems to be improving his ball handling. His wingspan allows him to guard the 1 through 5. When on the floor, he will often guard the opposing team’s best player, allowing the guards to focus on their shooting.

Harkless is another player whose defense is pivotal to Portland’s success. His shot has improved and his ability to knock down open 3’s is key. He isn’t going to knock down a deep 3 or get a huge block in the paint, but his contributions are a key factor.

A primary ball handler for the Blazers, Turner, a No. 2 draft pick, has struggled. If Turner can keep from turning the ball over, he is a necessity as he provides some ball skills.

In order for Portland to remain successful, it needs every piece of its roster to excel. The bench has to keep scoring, and the younger players need to keep improving.

The West is a tough division, and every game is a battle. But team chemistry and development give the Blazers a chance every night they take the floor.