Cable is the right choice 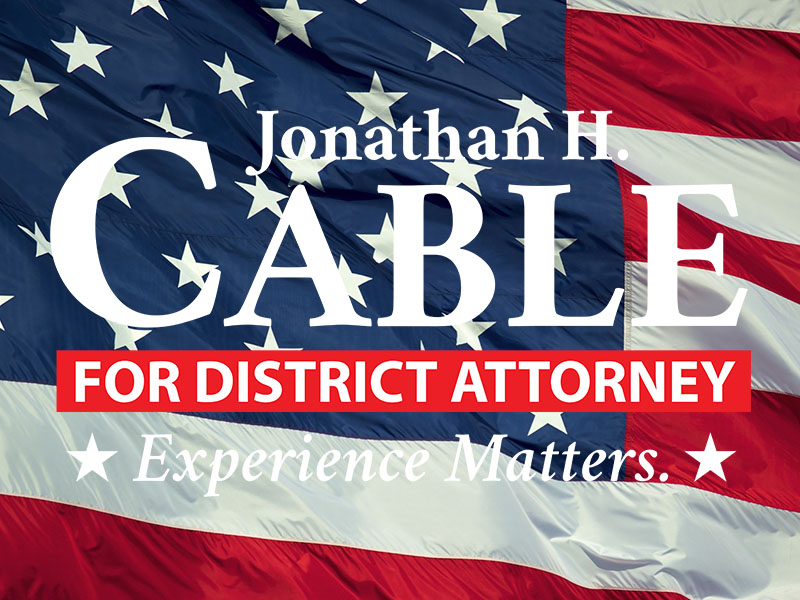 I was not in Lincoln County long, but I quickly developed a deep love for this beautiful part of the state and the communities that make up the county. For that reason, and because I was asked to, I threw my name in the hat for consideration for the appointment as District Attorney when Michelle Branam left. I was naturally disappointed, but not surprised, that the decision was made to give the appointment to Jonathan Cable. Mr. Cable’s connections to the area far exceeded those of any of the other three of us who applied, and he has an impressive, varied resume of experience that will, and has, served him well in the role.

I left Lincoln County, but I remain passionately interested in the community and the success of the District Attorney’s office. I know both candidates for DA – I have gone head-to-head in court with Mr. Cable, and occupied the office next door to Ms. Danforth in the DA’s office. I know them both personally and professionally. I have watched their campaigns from a distance. And I feel the need to speak up.

I can attest that Lanee Danforth is a very smart attorney. When she is invested in a case, she throws herself into it with abandon, and she is usually successful in trial. She is a real resource in that office, and has an outstanding grasp of the evidence code. She is perfectly suited to be a deputy district attorney, and an excellent one.

She is not, however, a leader.

Having worked alongside her, I can say without hesitation that she would be the absolute wrong choice for DA. The position of DA is an administrative, and to a lesser degree, political, one. The DA has to be a leader, an inspiration, and a deft manager of people, budgets, expectations, relationships, and messages. Crucial to the success of the DA is transparent, ethical, dedicated focus on the role of the DA in the criminal justice system, and the importance of independence and absolute adherence to the law, recognizing the awesome power the position can wield. It is helpful, to be sure, if the DA is also a good trial attorney. However, exceptional, ethical leadership is what Lincoln County, like every other county, needs in the DA.

PAID FOR MY MICHAEL THORNICROFT

Put Lanee in the game

I had the opportunity to watch lawyers both from the defense community and from the district attorney's' office.  Lanee Danforth was by far the most impressive.
Read more

Lanee knows the law better than anyone

I was Lanee's direct supervisor in the office and I can tell you that she has what it takes to be a great district attorney for Lincoln County.
Read more

Lanee has a natural ability to lead

For nearly the last four years, I've had the unique perspective of observing most attorneys in Lincoln County and many others from larger firms across the state. I can unequivocally say that few, if any, have impressed me as much as Lanee Danforth.
Read more

I am writing this letter out of deep concern for our community and to share what I have learned after 22 years practicing criminal law, this being my 17th year as a prosecutor.
Read more

Right now, Jonathan Cable's experience matters. He is showing solid leadership in these troubling times and is working 24/7 to maintain law and order while our county weathers this storm.
Read more

As we go through the coronavirus crisis, we are all, first and foremost, concerned about the health of our loved ones and communities.
Read more

As you know, the coronavirus has become a major health concern, not just in China, but in other parts of the world, too – and it’s also shaken up the financial markets.
Read more

If you own a business, you know that setting up a retirement plan for yourself and your employees can be challenging. But it may now be getting easier.
Read more

You may have heard that timing is everything. And in many walks of life, that may be true – but not necessarily when it comes to investing.
Read more

Invest in Your Family and Community

Why do you invest? For many people, here’s the answer: “I invest because I want to enjoy a comfortable retirement.” And that’s certainly a great reason, because all of us should regularly put money away for when we’re retired. But you can also benefit by investing in your family and your community.
Read more