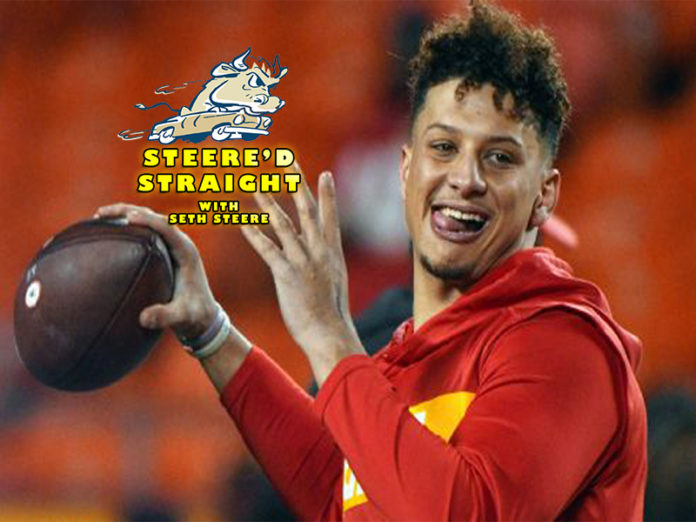 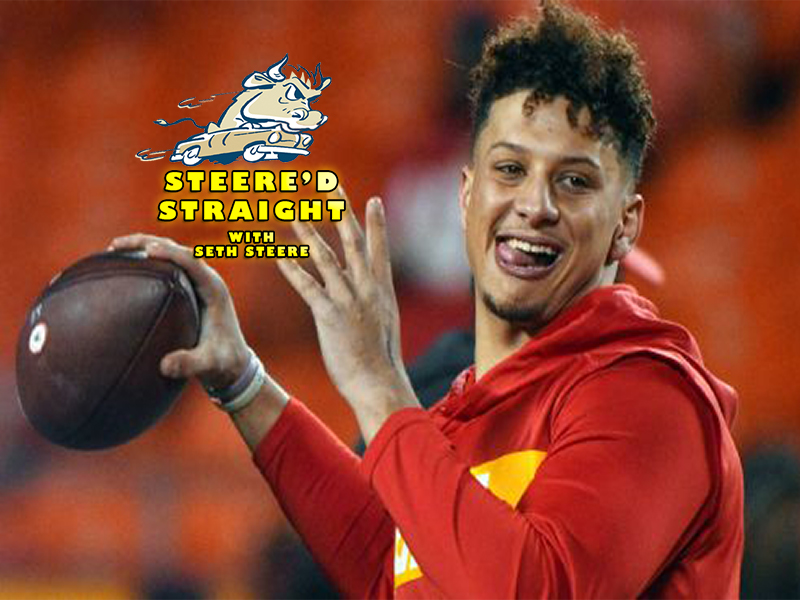 The NFL MVP race has been up for debate since the beginning of the season. It’s time to put the debate to rest and just crown Patrick Mahomes already.

The argument against the Kansas City Chiefs QB is he turns the ball over and can’t win big games. So far, Mahomes has accumulated 45 touchdowns with 11 interceptions. That puts his TD-to-pick ratio at 4-to-1.

Green Bay’s Aaron Rodgers has amassed a 4.2-to-1 ratio over a Hall of Fame-caliber career, throwing just two interceptions this season. Just because there are accurate passers such as Rodgers, don’t knock Mahomes, who’s on pace to stand second all-time in TD-to-interception ratio.

Mahomes has led the Chiefs to an 11-3 record and the top seed in the AFC despite their recent narrow loss to Philip Rivers and the Chargers on a game-ending two-point conversion. Kansas City’s other losses have come on the road to the Rams and the Patriots by a combined six points. In the Chiefs’ three biggest games, they have lost by a combined seven points, leaving them a touchdown and an extra point away from being undefeated.

Other than possibly the Chargers game, it’s hard to fault the offense. The Chiefs have averaged 39.6 points in the three losses — four points higher than their season average, and they lead the league in points per game. It’s hard to blame a loss on an offense putting up nearly 40 ppg. Against the Rams, the Chiefs became the first team ever to lose when scoring more than 50 points.

Not only has the offense been stellar in defeat, but Mahomes has put up solid performances. He averages 357.6 yards and four touchdowns per game, both higher than his season average. Mahomes is doing everything he can to put his team over the top in big games, but the defense is not stepping up and making plays. 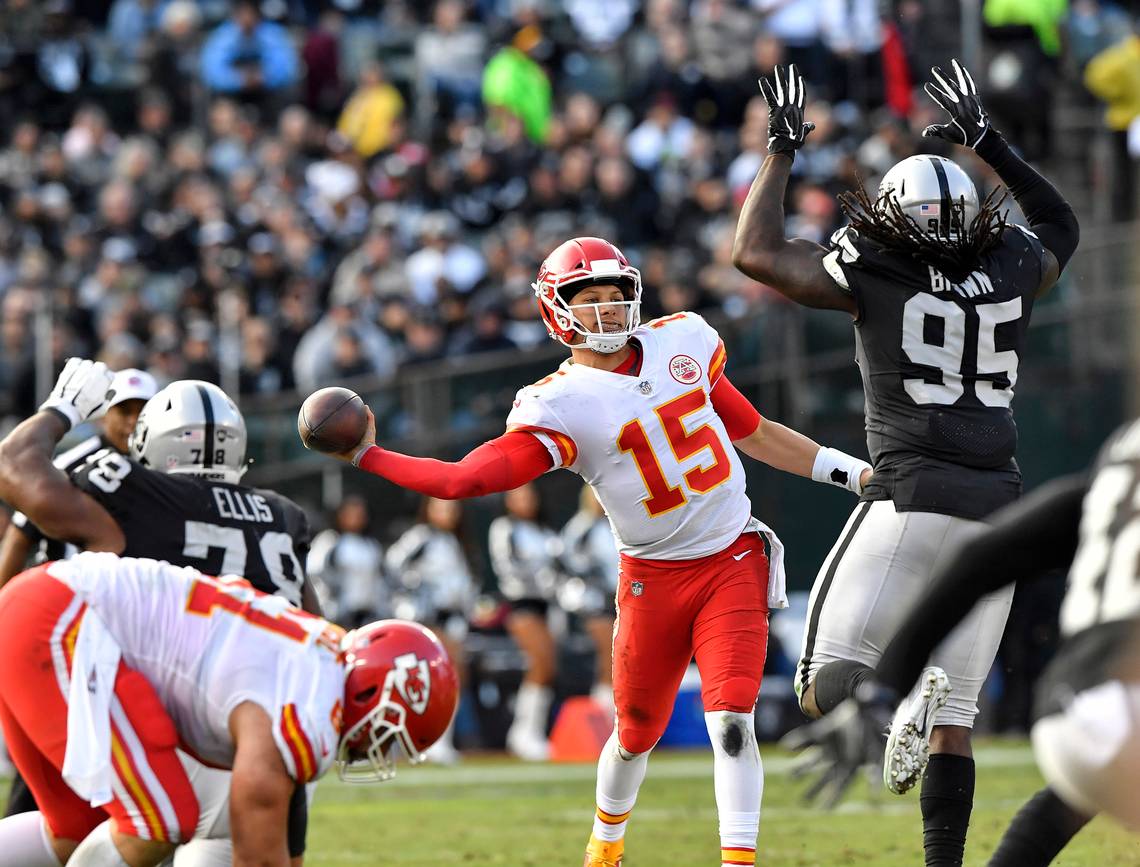 Mahomes’ biggest competition for MVP this season has been Saints QB Drew Brees, who is getting a lot of credit for his efficiency. Unlike Mahomes, Brees has struggled in some of his biggest games, and his defense is stepping up in his absence.

The Saints and Brees struggled against the Cowboys and Panthers, averaging 11 ppg, 20 fewer than their season average, and 15 less than the Chiefs’ lowest scoring game. The Saints were able to squeak out a win against the Panthers, but no thanks to Brees.

Brees has not been solid in those games, averaging only 165 yards passing with a lone touchdown against Dallas. While Mahomes turned the ball over against the Rams and Patriots, he was able to give his team a fighting chance.

The argument for MVP remains, but when you look at production, Mahomes is prevailing by a long shot. Don’t forget that Brees is nearly 40 and shouldn’t be turning the ball over at the same rate as Mahomes, who is only in his second season.

By the end of the year, Mahomes could become the third player in NFL history to throw for 50-plus touchdowns and second to throw for 5,000 yards and 50 touchdowns, joining Peyton Manning.

The Running Back Position is Valuable

Talk about the running back position being invaluable has become more and more of a hot topic among sports media in recent years. It’s time to end that narrative.

Out of all the teams in the playoff picture (NFC: Saints, Rams, Bears, Cowboys, Seahawks, Vikings; AFC: Chiefs, Texans, Patriots, Steelers, Chargers and Ravens), only the Steelers and Vikings find themselves in the bottom half of the league in rushing. What do those teams have in common?

1) They have both suffered injuries at the running back position and/or lost their top back;

2) They have arguably the best receiver tandem in the league with Adam Thielen and Stefon Diggs in Minnesota, and Antonio Brown and JuJu Smith-Schuster in Pittsburgh.

The Rams have struggled in their last three games, not putting up points like earlier in the season. In their three losses, running back Todd Gurley has carried the ball less than 15 times, but the Rams are 10-0 when he gets 15 carries. When arguably the best running back in the league gets touches, his team wins; when he doesn’t, it loses.

In a league where passing has completely taken over, teams still find success running the ball. The Seahawks, who appear playoff-bound, have run on more than half of their plays. As the only team in the league to do so, they are showing you can run the ball and be successful. Seattle has averaged 134 yards rushing in its eight wins.

The running back position is just as important as it has ever been. The Cowboys’ Ezekiel Elliott and Giants’ Saquon Barkeley have shown us that picking a running back early in the first round is wise. Elliott has been the engine for the Cowboys offense ever since entering the league, leading the NFL in rushing his rookie year and the Cowboys to a 13-3 record.

The next year, when Elliott missed six games due to a suspension, the Cowboys struggled, going 9-7. This year, the Cowboys have Zeke back and Dallas leads its division with Elliott leading the league in rushing.

Barkley certainly hasn’t led to as much success in the win column with the division-rival Giants as Zeke, but he has still changed the offense. In New York’s wins, he averages just over 140 yards from scrimmage, just over one-fourth of the team’s total yards — and he’s not a quarterback.

Those who say running backs shouldn’t be drafted in the first round and the position holds little value to a team’s success are misinformed. If the talent is there, they are worth the high pick. Teams aren’t going to find success strictly running the ball, but they aren’t going to be successful just throwing it either.

The key to success is a balance of running and passing. Some of the passing game’s biggest plays happen off play-action, which relies on having a successful running game. Running the ball opens up the pass and vice versa, adding value to each other — and victories for teams that have both.