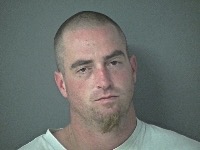 Over the weekend a Newport Police Officer was dispatched to the area of SE Benton and East Olive Streets on a report of a toddler wandering around in a parking lot near the road.The child guided the officer back to a vacant commercial building in the 200 block of East Olive St. She told the officer this was her home. The officer found the door ajar. A male, later identified as Boldragon Plexico, age 31 of Siletz, was located in the rear of the building. Plexico was passed out and lying face down with his hands tucked under his stomach. The Officer observed multiple edged weapons lying around Plexico, and an empty holster for a firearm. The Officer called for back-up.

When the another officer arrived, Plexico was roused, and the handgun he had been lying on was taken from him. Officers determined that the two-year-old was Plexico’s daughter. The investigation also determined that entry into the building had been forced, and that Plexico did not have permission to be inside.

At one point during the investigation, Plexico tried to flee the scene and a short foot pursuit ensued, including Taser deployment by an officer. Plexico was taken into custody.

Plexico was transported to the Lincoln County Jail and lodged on two counts of Criminal Mischief, Burglary, Trespassing with a Firearm, Felon in Possession of a Firearm, Child Neglect, Reckless Endangering, Resisting Arrest and Escape. His bail was set at $305,000.

There was no injury to the child. She was placed in temporary custody of the Department of Humans Services Child Welfare Division until the biological mother could be contacted and respond.