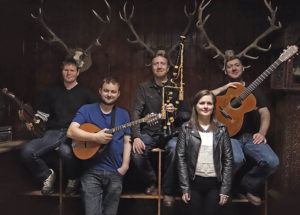 Lovers of guitar, pipes, whistle, mandola and Scottish Gaelic, get ready to take a “dive” at the Lincoln City Cultural Center. Why a “dive”? That’s how you pronounce the word “daimh” which translates into “kinship” and is the name of last year’s “Folk Band of the Year” at the Scottish Traditional Music Awards. The five musicians of Daimh will be performing at the LCCC on Sunday, Feb. 12, at 7 pm. Tickets are on sale now at lincolncityculturalcenter.org.

Daimh calls itself a “Gaelic Supergroup” and they’re known as the unchallenged champions of straight-in-the-eye Highland music. They’re based around West Lochaber and the Isle of Skye, but they’ve taken their music to more than 20 countries, from Moscow to San Francisco. With a reputation as giants of the bagpipes and fiddle, Angus Mackenzie and Gabe McVarish lead the melodic powerhouse with fellow founder member Ross Martin underpinning the groove on the guitar. They’re joined by “new guy” Murdo “Yogi” Cameron, on mandola and accordion, to complete the instrumental lineup.

Daimh have always had the renown and notoriety of working with some of the finest Gaelic singers in Scotland and the current line up only serves to cement that distinction with the addition of the Gaelic firmament’s most rapidly rising star, Ellen MacDonald on vocals.

Recent accolades include last year’s award for the “Best Folk Band in Europe” at the prestigious Folkherbst competition in Germany and most recently winner of “Folk Band of the Year” at the Scottish Traditional Music Awards. From pyrotechnic jigs and reels to achingly poignant ballads, Daimh runs the full expressive gamut of folk music. Although they’re renowned for their live shows, they’ve released five studio albums including the most recent, Tuneship.

The Lincoln City Cultural Center show will begin at 7 pm. Doors to the auditorium, inside the historic Delake School at 540 NE Hwy. 101 in Lincoln City, will open at 6:30 pm. Tickets are $25 in advance, and $27 at the door, $10 for youth ages 18 and under, with a $2 discount for current LCCC members. Reserve online on the center’s website, lincolncityculturalcenter.org, or call 541-994-9994.

“This is a great Gaelic band and definitely worthy of the title Gaelic Supergroup.”

“Daimh have carved a reputation from the bedrock of Gaelic culture … authentic Gaelic music with a modern edge and a magnificent range of expression. This could be one of the best Scottish releases of 2014.”

“Love, life, loss and Lochaber: ‘Tuneship’ displays the growing maturity of a group whose work screams of place but which is rooted firmly in the present.”

Angus MacKenzie: Highland Pipes/Border Pipes/Whistles
A Gaelic-speaking piper from Mabou, Cape Breton Island on Canada’s East Coast residing for the past 17 years on the Isle of Skye. His piping style draws on his strong South Uist roots along with the dance-influenced rhythms of Cape Breton music. 2012 saw Angus, along with his brother Kenneth nominated for Roots Traditional Recording of the Year at the East Coast Music Awards for their album, Pìob is Fidheall.

Gabe McVarish: Fiddle
Hailing from Northern California, where his family settled after emigrating from Morar, Lochaber via Prince Edward Island. At the age of 17 Gabe travelled to his ancestral homeland of the Scottish Highlands where he spent a year studying music under the tutelage of fiddler and tradition bearer Angus Grant Sr. After completing a degree in Scottish music Gabe released solo album Eclection, a culmination of fiddle styles and repertoire from both sides of the Atlantic.

Ellen MacDonald: Gaelic Song
Widely tipped as the most exciting thing to happen to Gaelic song since the invention of the Ceilidh, Ellen MacDonald is fast finding a flock of fans and followers with her natural, smoky voice and individual interpretation of songs covering the full emotional spectrum of the Gael. Born and raised in Inverness with strong maternal ties to the language and songs of North Uist and Scalpay, Ellen studied at Scotland’s only dedicated Gaelic language college, Sabhal Mòr Ostaig on the the Isle of Skye. Ellen’s acting skills have seen her nominated for ‘Best Performance’ at the FilmG awards for her role in a Gaelic short film ‘Briste’ and landing a key role in the BBC’s new Gaelic drama “Bannan”.

Murdo Cameron: Mandola/Mandolin/Accordion
Murdo comes from a long line of traditional Gaelic singers and was immersed in music growing up Glenelg, a wee village a stones throw across from the Isle of Skye, famous for being twinned with Mars. A member of the Mountain Rescue, Murdo started out as an accordion player and piper, who in the last few years has been a busy guitar accompanist and stringed things enthusiast.

Ross Martin: Guitar
From Arisaig though now lives in neighboring Morar. A fisherman from early teens until his twenties and now an active member of the Coastguard, Ross has gone on to tour Europe and the U.S. with Irish singer Karan Casey. Ross’ unique style of guitar accompaniment has him in demand for numerous projects including Dual, a collaborative exploration of traditional Gaelic music of Scotland and Ireland by Danù singer Muireann Nic Amhlaoimh and Brave singing sensation, Julie Fowlis.