Oregon added 6,100 nonfarm payroll jobs in October, continuing a trend of strong job growth. Since October 2015, Oregon added 55,400 jobs, which was a gain of 3.1 percent. This growth rate is nearly double the national job growth rate of 1.7 percent over that period. Oregon’s September nonfarm payrolls were revised upward by 1,900 jobs to a new reading of a gain of 4,300 jobs.

In October, Oregon gains were led by two industries which each added 1,800 jobs: construction and health care and social assistance. Next in line were leisure and hospitality, which added 1,000 jobs; government, which also added 1,000; and retail trade, which added 900. Only one major industry declined substantially in October, as professional and business services dropped by 1,200 jobs. 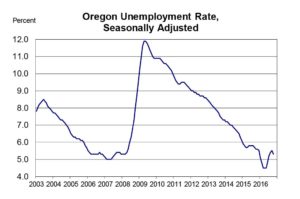