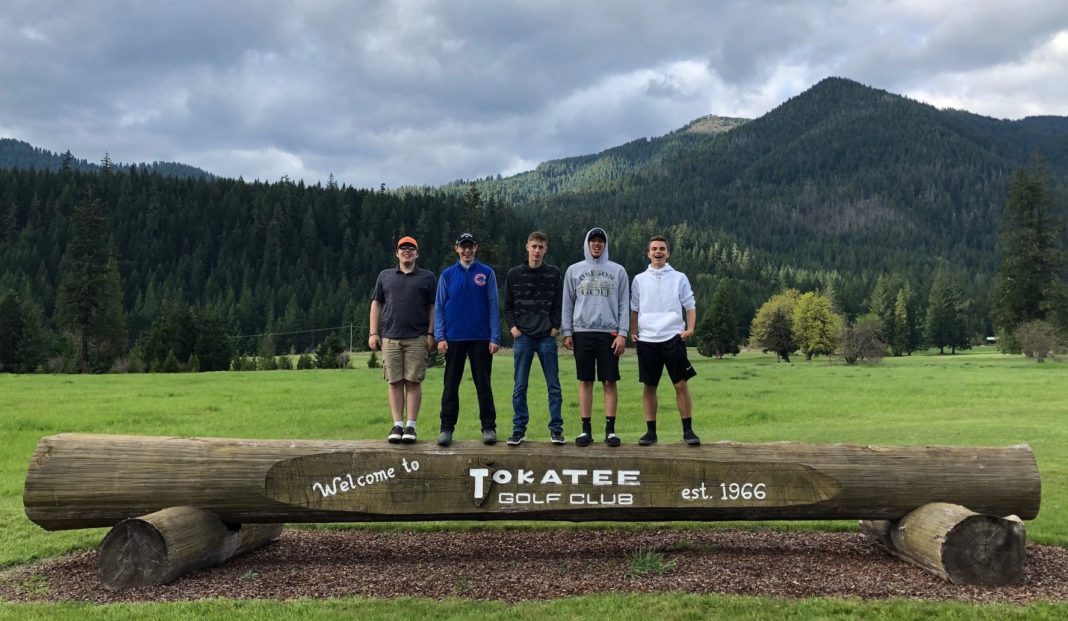 The Taft High boys golf team spent a weekend on the links and touring Central Oregon in preparation for next week’s Class 3A/2A/1A Special District 2 Championships at Trysting Tree in Corvallis.

The Tigers competed Monday in the La Pine Tournament at Quail Run Golf Course, placing third behind the host school at 434, a shot short of Creswell, but well off the winning total of 344.

“The final league tournament of the 2019 season happened Monday at Quail Run, near La Pine. Taft championship golfers, book-ended the Tiger five, with two perfect drives on hole one. Taft senior leader William Brooks played a nice, gentle draw into the fairway with some brisk wind at his back.

As part of the second group of the day, Brooks led his team into the 47-degree day, just before noon. Followed by freshmen Zac Will, Ethan Unruh and Eston Whisler, Taft was anchored on this windy morning by junior, Jonathan Freilinger, who also hit a perfect drive to the center of the first fairway.

“The young Tiger team is finishing a weekend of golf and teamwork as the Taft boys have traveled on their annual golf trip to Central Oregon. Beginning early Saturday morning, the Tigers headed up the McKenzie River to get an 18-hole practice round at Tokatee Golf Course.

“A favorite stop, Tokatee provides a beautiful place to compete with one another as the Tigers head to their weekend retreat, sponsored by Meredith Lodging, at Sunriver. Playing in the beautiful woods at the halfway point is a great way to play a complete round on a challenging setting, with small, fast greens and friendly fairways.

“Coming from the wet coastal weather, on grasses left longer, the putting at Central Oregon becomes a real challenge as the Tigers prepare for the later rounds in May at both the District and State championships. Tokatee Golf Course provides a bridge to the quicker grasses and more challenging putting. The Tigers are welcomed with great rates and a friendly welcome, as they stop to practice. Once Taft reaches the high-desert courses near Bend, the ball travels farther and the greens putt faster — prelude of things to come.

“With a Monday tournament hosted by SD2 District-leading LaPine High School at Quail Run Golf Course, the visiting Tigers took advantage of the offer for a free practice round on Sunday at the same location. Such great hosts, Quail Run treated the Taft boys with terrific rates and hospitality.

“Last year, due to the late weather conditions, Quail Run was unable to host the tournament, leading La Pine to hold the tournament at the Meadows Course at Sunriver. So, this was the first time most of the Tigers have played on this narrow, and challenging public course.

“The team benefited from the Sunday preview round. Scoring higher than the last tournament, the Tiger boys learned valuable intel on their practice round at the only recently-opened (due to winter weather) golf course. Because of a particularly long and cold winter, there are four temporary greens as the course is set up for the Monday tournament. Also, the fairways are still dormant in many cases, leading balls to roll what feels like forever.

“In Monday’s tournament, Brooks made the turn with a score of 43, helped by a birdie-2 on the second hole. William has been striking the ball well, but has battled consistency throughout his complete round of 18 holes. Brooks didn’t quite find his groove, finishing in with a 47, giving him a tournament total of 90.

“Second Tiger group Zac Will managed a 51-55, for a total 106, as he continued to work on his groove. Zac felt the cold air and saw a snowman (8) on both the front and back of the mountain course — preventing a sub-100 score he desired.

“Ethan Unruh has established himself as the No. 3 golfer for the young Tigers. His consistency and ability to ignore emotions has been his greatest asset. Ethan managed a 56 after nine holes before turning to the windy back nine and finishing with a 115.

“Followed at Tiger No. 4, Eston Whisler is the third man in this ‘Three-Amigos’ group of Taft freshmen. Eston has begun to strike the ball very well and has continued to improve his short game making the turn with a 60 and carding a tough 123 for the tournament total.

At the back of the Tiger roster, junior Jonathan Freilinger has become a driving force, providing some glue to this group of five. Jonathan scored a personal-best 127 after a pep-talk and received a pat on the back from all of his teammates as his game continues to be refined. Jonathon’s improvement has had a positive effort on the entire team.

“Heading to the second nine in this 18-hole tournament, the Tigers were acclimating to the high-desert wind and cool temperatures of high 40s, under the clear blue sky. Optimism, frustration, fatigue and challenge confronted the Tiger team — dedicated to making improvements as the Tigers continue to polish their skills.

“Besides the good scores from Brooks and Freilinger, the team needed improvements on the card to have any chance at the top two spots. Unfortunately, the elements and the long hours got the best of the team as everyone posted higher scores on the second nine.

“The tournament and the long weekend of travel provided valuable experience to the young Tiger squad. Brooks told the young Tigers of their great opportunities ahead. “You guys just need to play a ton of golf,” he said.

“The Taft Tigers finished the tournament with a team score of 434, earning them a third-place finish. Bested by a single stroke, Taft was behind Creswell at 433, as host team La Pine paced the group — as they have all season — with a team score of 344. Led by 2018 state top-five finisher Tommy Rohde’s tournament-best 74, La Pine carded three sub-100 rounds, displaying the type of competition the young Tigers will face.

“Coming home to the Tigers’ home course at Salishan Resort, Taft will be better prepared to shape shots around the narrow, challenging track. Salishan plays long and narrow, creating challenges everyone will find at the State championship course at Emerald Valley — home of the Oregon Ducks golf team.

“Taft championship golf is one of the luckiest programs to get to play on some of the finest courses on both sides of the Cascade Mountains. Bringing three freshmen back next year will provide a great springboard, as the culture of Taft boys golf returns to the discussion at the State championships in 2020.”