Special election to be held for Lincoln City Mayor 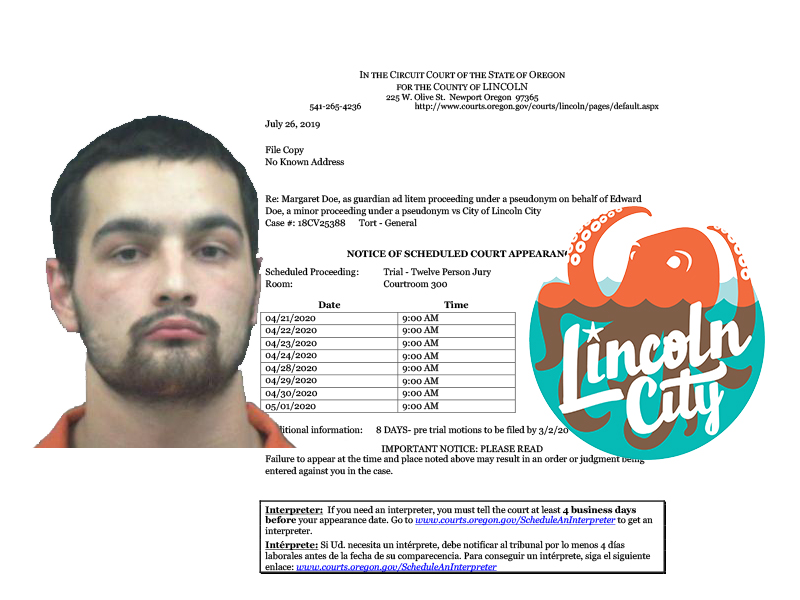 A trial date in April 2020 was set Friday for a $4 million lawsuit against the City of Lincoln City claiming negligence in the employment of youth league sports coach Tyler Lopez, who was sentenced to more than 40 years in prison for sex abuse of minors.

A 12-member jury trial is scheduled to begin April 21, 2020, in Lincoln County Circuit Court in Newport over an eight-day period and expected to conclude by May 1. Pretrial motions are set for March 2, and a hearing to review trial readiness is scheduled March 30.

The suit alleges that the Taft High graduate and former multisport star engaged in intentional conduct resulting in physical injury, mental injury, sexual abuse, and/or sexual exploitation of the plaintiff while employed as a youth league coach with the Lincoln City Parks & Recreation Department.

Specifically, the lawsuit, filed June 20, 2018, by the Portland-based law firm Crew Janci on behalf of guardian Margaret Doe and alleged victim Edward Doe (pseudonyms), claims Lopez, under the guise of being an authority figure, adviser and mentor, sexually abused and molested the plaintiff while he was a minor.

The suit asserts that “prior to the last incident of Plaintiff’s abuse, Defendant received notice of allegations that Lopez was engaging in inappropriate conduct with Plaintiff and/or other minors participating in LCCC’s youth sports programs and activities” but that, despite knowledge, “no employees or agents of Defendant commenced an adequate investigation, nor did they report the suspected abuse to state licensing authorities, the Department of Human Services, and/or law enforcement” as required under Oregon’s mandatory reporting laws.”

The suit further alleges that the victim “has suffered and will continue to suffer severe and debilitating physical, mental, and emotional injury, including pain and suffering, physical and emotional trauma, and permanent psychological damage.”

Lopez pleaded guilty Sept. 7, 2017, to numerous charges of sexually abusing six minors between 2013 and 2017 and was sentenced to more than 40 years in prison. As a part of the sentence, Lopez was ordered to register as a sex offender when he is released.

Lincoln City officials have not commented on pending or active litigation regarding the case.

City of Lincoln City: Keep it legal and keep it safe