Private property could be considered for temporary emergency Warming Shelter use 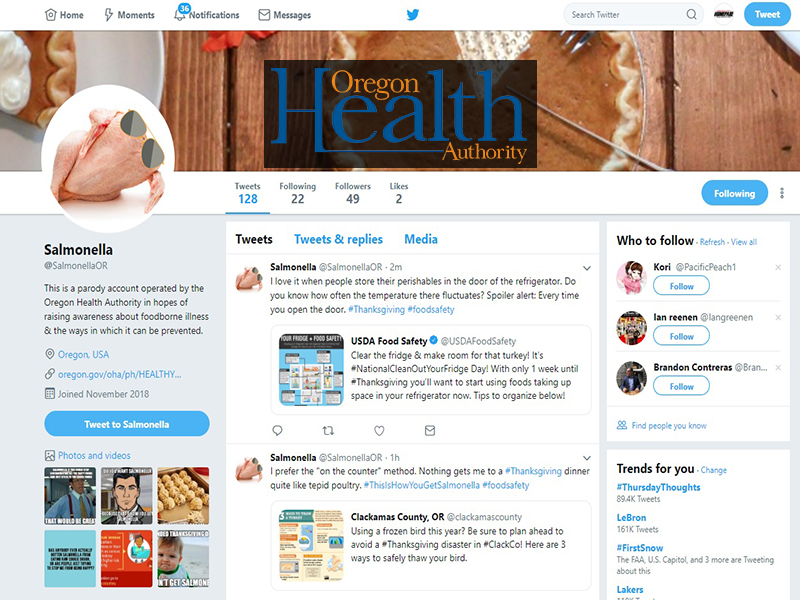 Nothing ruins a holiday gathering quite like an unwelcome guest, particularly when that guest is a bout of food poisoning.

Through his tongue-in-cheek tweets, Salmonella (inadvertently) highlights ways Oregon cooks can make their kitchens less welcoming to the illness-causing contaminant. 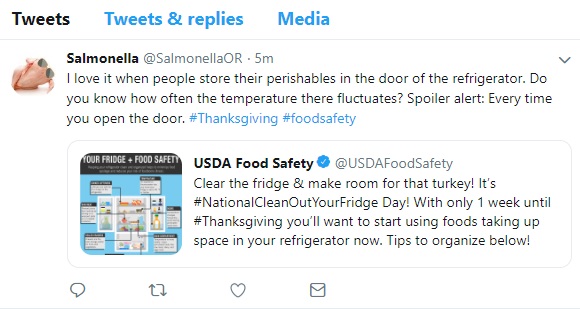 In his messages, Salmonella enthusiastically tells people that using the same cutting board for both raw meats and vegetables is a great way to invite him to dinner; cooking stuffing inside the turkey appeals to his sense of living dangerously; and not to believe the nay-sayers—eating raw cookie dough really is a great way to get sick.

“We want people to know salmonella can have serious consequences for your health,” said Emilio DeBess, DVM, state public health veterinarian and an OHA salmonella expert. “But you can keep it off your menu by taking simple steps as you prepare your food.”

Each year 400-500 cases of salmonella are reported in Oregon. The Centers for Disease Control and Prevention estimates salmonella causes 1.2 million illnesses, 23,000 hospitalizations and 450 deaths in the United States each year.

Although cases of salmonella are most common during the summer months, food is often a central part of holiday preparations, making Thanksgiving and the winter holidays a good time to raise the subject.

“If health experts always deliver food safety messages in the same way, we run the risk that people will tune them out,” Cowie said. “Social media can help spread the word, but it means we have to take a different approach. Our intent with Salmonella’s light-hearted tone is to reach more Oregonians and warn them: Don’t take Salmonella lightly. He can ruin your holiday—or worse.”

Through the campaign, the Salmonella parody account will respond to Oregon-based audiences posting on social media about preparing or consuming food and deliver a timely food safety message. In its first 72 hours, Salmonella has reached nearly 50,000 Oregonians.

Using social media to deliver public health messages is an emerging health communications practice and similar campaigns have shown positive results. In its “Melanoma Likes Me” campaign, Melanoma Patients Australia created a Twitter persona for Melanoma to reach young Australians, the group most at risk for the lethal cancer. Over the summer of 2014-2015 the campaign reached 2 million people and helped generate a 1,371-percent increase in unique visits to the Skincheck mobile site, a site that helped users check their moles and marks for signs of cancer.