Stranded juvenile whale to be euthanized after washing ashore near Waldport

Time has run out on a 20-foot juvenile humpback whale stranded ashore on the beach near Waldport.

“They are euthanizing the whale,” Chris Havel of the Oregon State Parks and Recreation Department said Thursday. “They are administering those drugs now and it will probably take about an hour to take effect. There will be a small autopsy on the beach and a burial on the beach.”

A team organized by the Oregon State University-based Oregon Marine Mammal Stranding Network (OMMSN) responded to the site north of the Alsea River early Wednesday morning and coordinated an all-day effort to relieve the animal’s stress.

“I haven’t heard any of the biologists or veterinarians on site offer any opinions about how it got here, but that’s among the sorts of things they might learn when they do their tissue samples and examination of the carcass,” Havel said.

“The whale exerted a lot of effort to swim past the sandbar to deep enough water,” she said. “Unfortunately, every time the whale oriented itself toward the ocean, it would get pushed broadsided to the waves and come closer to shore. As the night went on, the whale stranded further on shore due to the strong waves and extremely high tide.”

Stranding specialists consulted with colleagues nationwide and determined euthanizing it was the only humane option. The team considered trying to move the animal closer to the water or give high tides another chance, but neither alternative was deemed feasible.

“Due to the size of the whale and amount of time spent stranded on land, it is likely that the internal organs suffered irreparable damage that is not externally apparent,” Blades said.

After a necropsy to gather important data on whale biology, a state park contractor will bury it on the beach near the site of the stranding.

After high tides mid-day Wednesday and after midnight, a team of contractors representing the National Oceanic and Atmospheric Administration arrived early Thursday morning to assess the whale. 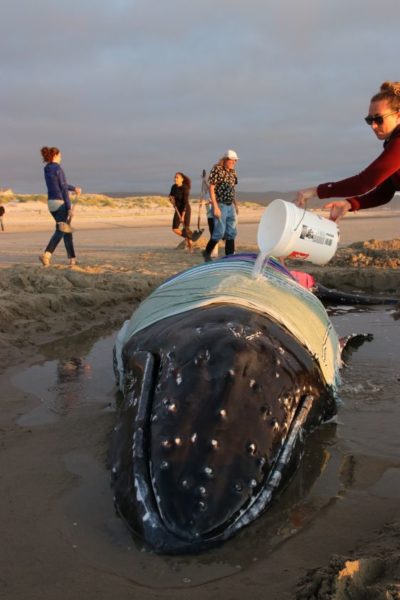 Students, volunteers and staff with the OMMSN, Oregon Coast Aquarium, OSU Marine Mammal Institute and OSU Hatfield Marine Science Center provided comfort care by digging out around the whale to keep it wet.

Oregon State Park beach rangers also provided support. During high tide, the whale managed to swim free briefly before stranding itself again. Members of the team stayed on site most of the night.

OPRD reminds residents and visitors that the ocean shore is a wild environment and presents an invaluable opportunity to enjoy wildlife and natural cycles. 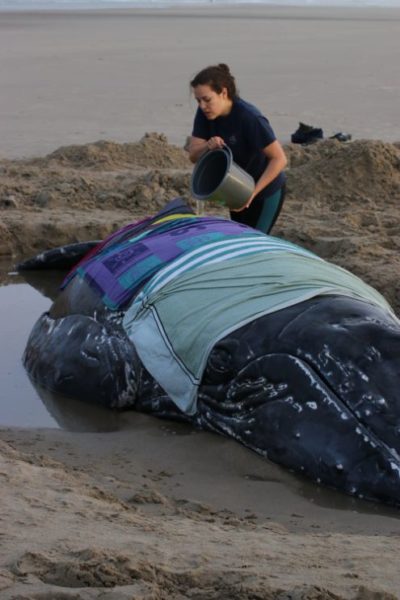 Wildlife should be given a wide berth and shown respect at all times, however. Any stranded marine mammal should be reported immediately to 541-270-6830. Marine mammals, including carcasses, are protected by federal law and must be left untouched and given 150 feet of space in all directions.

The OMMSN began in the 1980s and is involved in collection and analysis of data and biological samples. 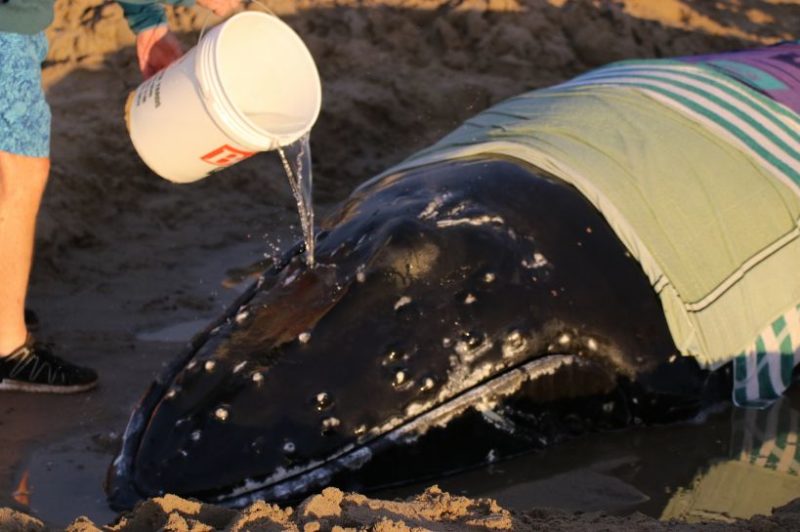 Data collected from such events are entered into a national database that is used to establish baseline information on marine mammal communities and their health. The Stranding Network is a volunteer organization, with one paid staff member, the network coordinator, for the entire state of Oregon.

Stranding network members are from universities, state and federal agencies and the general public, and donate their time. The network does not receive state funds. Information on volunteering or donating to support the network is online at https://mmi.oregonstate.edu/ways-help. 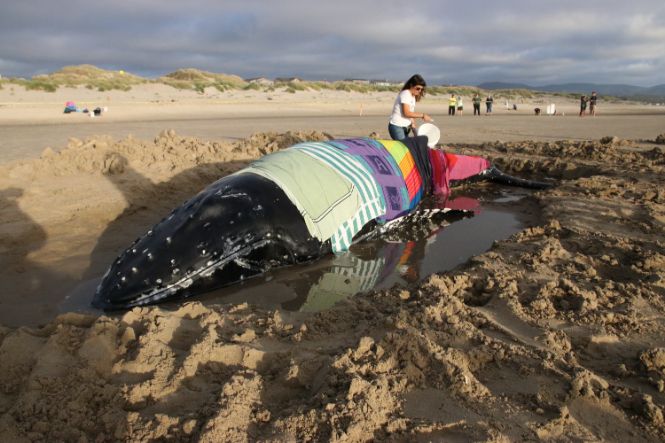 The Lincoln Co. Sheriff’s Office is requesting that Waldport residents or businesses with security video systems such as the doorstep “Ring” or other recording devices contact law enforcement immediately to help solve the shocking murder early Sunday morning of businessman Mark Campbell.

We missed you whale you were gone

Whale of a tale? Tail of a whale? Beached object stokes resident’s curiousity