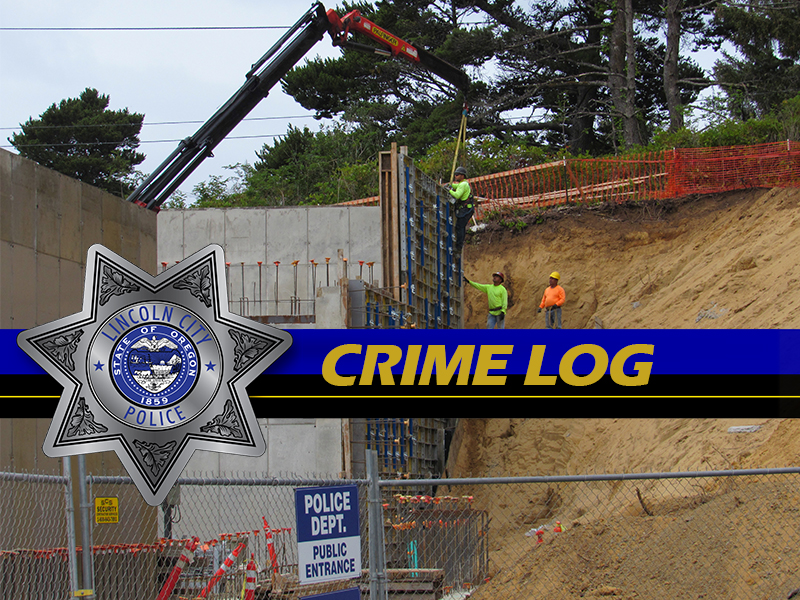 Trespass – 9:51 a.m. – Lincoln City Sporting Goods – Caller reported Benjamin Pasciyo is behind the business. Pasciyo was gone upon officer arrival. Subject is trespassed and will be cited if located.

Fraud – 4:53 p.m.  Victim received phone bill for two iPhone’s he did not order.

Assisting Outside Agency – 6:45 p.m. – SNLH – Report of an abandoned vehicle at hospital.

MIP – Taft High School – Report of non-student in school refusing to leave. Juvenile taken into custody and referred for MIP and transported to responsible adult.

Disturbance – 10:37 a.m. – Josephine Young Park, SW 65th St. – Caller stated a drone was harassing her and her husband, then the owner started yelling at them.

Disturbance – 5:18 a.m. – 562 SE Neptune Ave. – Disturbance in street. Officers made contact with the group and requested medics for evaluation.

Found Property – 5:28 a.m. – 1501 NW 40th Pl. – Clothes found on the beach. Officer made contact with the owner of clothes. She had tried to dispose of them in the ocean. She has been advised to come pick them up.

Disturbance – 12:21 a.m. – Chinook Winds Casino – Report of casino security having trouble with some patrons on the main gaming floor. Douglas A. Loucks (6/21/75) cited and released for harassment.

Assisting Outside Agency – Douglas K. Thompson (4/1/58) Thompson taken into custody for failure to register as a sex offender.

Found Property – Flares turned into LCPD that were found on road.

Criminal Mischief – 7:28 a.m. – Game Over Arcade – Juvenile broke open a number of machines to get the quarters.

Domestic – 6:15 p.m. – Report of a juvenile assaulting her parents. Juvenile referred to courts for harassment.

Welfare Check – 10:42 a.m. – 2020 SE Highway 101 – Multiple reports of a male behaving strangely. Male wearing torn pants, no shoes and a hospital bracelet was having a conversation with someone who wasn’t there. Transported to SNLH.

Runaway Located – 1132 SW 14th St. – Juvenile female taken into custody as she is a runaway from DHS custody.

Assisting Outside Agency – 3:14 p.m. – Benjamin M. Noffsinger (8/26/79) taken into custody on warrant out of Lincoln County for contempt of court.

Suspicious Vehicle – 11:08 a.m. – SE 3rd St. public parking – Vehicle parked with plate that returns unable to locate. VIN is obstructed and can not be ran.

Disturbance – 1:33 p.m. – B Nails, 4079 NW Logan Rd. – Caller reported another female customer was screaming and threatening her. Amber M. Sirotak (3/16/82) was taken into custody and transported to LCPD then taken to Lincoln County Jail for disorderly conduct.

Found Property – 10:22 p.m. – Citizen requested we keep a green notebook in safekeeping for her until she gets out of jail.