For a clear, local snapshot of what is known about virus transmission today, Mollie Vance, RN, supervisor of Lincoln County Public Health’s communicable disease division, participated in the following Q & A.
Read more

The driver of a car that crashed into a house on NW Jetty Thursday is listed in stable condition according to Legacy Emanuel Hospital staff in Portland.
Read more
Crime

Oregon State Police say a son used his truck as a weapon against his father after an altercation while driving on Independence Day, nine miles east of Waldport.
Read more
Business
00:06:48

A busy Saturday in Lincoln City featured local business owners reactions to facemasks and sales, beachgoers turning out in droves and a brush fire brought to heel by the fire department.
Read more
Local News 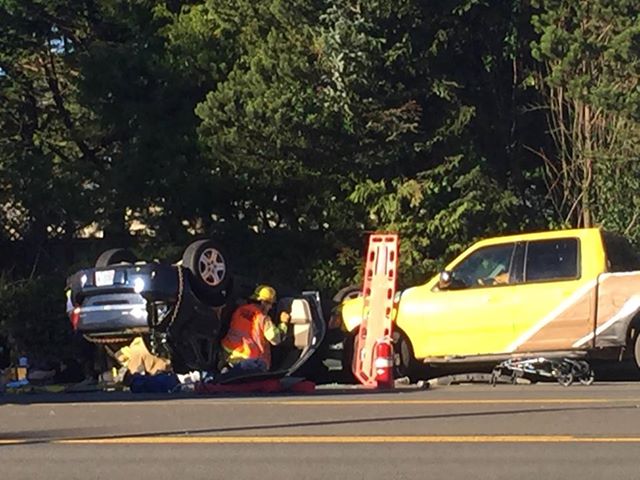 Two people were hospitalized Thursday morning following a traffic rollover near the 3400 block of North Highway 101 in Lincoln Beach.

Depoe Bay Fire was dispatched at 10:02 a.m. to the scene of a two-car accident with one vehicle upside down. One person was sent to Samaritan North Lincoln Hospital in Lincoln City and the other to Samaritan Pacific Communities Hospital in Newport.

The driver of a yellow pickup was uninjured.

“We send them to different hospitals to spread out the burden,” Depoe Bay Fire Chief Bill Johnson said. “The crews worked well together and got these people out in a hurry. We were able to get Highway 101 traffic flowing quickly.”

Johnson said the two people in the rolled-over vehicle had to be extricated using the Jaws of Life and stabilizers to keep the vehicle from moving.