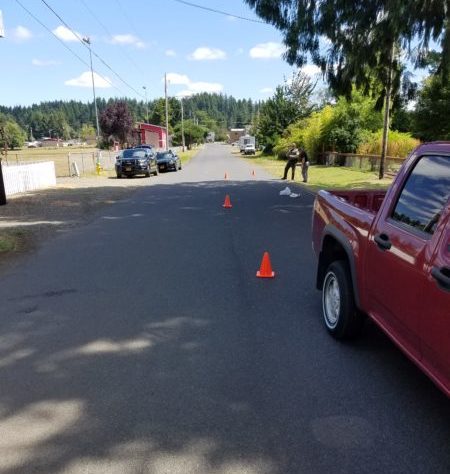 A young pedestrian suffered minor injuries at approximately noon Monday after being struck by a driver in Siletz.

Lincoln County Sheriff Office deputies were dispatched to a crash in the 300 block of W. Buford Avenue, where a child was transported to Corvallis Hospital with minor injuries and returned home shortly thereafter.

Police reported the crash occurred after the driver looked away from the roadway momentarily and drifted over the center line. No impairment was suspected, but charge of careless driving is being pursued.

A Newport man has been arrested on manslaughter charges following the driving death of a female passenger from Waldport Saturday evening near Newport.
Read more

Lincoln County Sheriff deputies will be on the prowl for motorists failing to provide proper safety seats for kids Aug 19- Sept. 1, as part of a statewide effort to enforce traffic occupant protection.
Read more

Toddler in stable condition after being struck by truck while camping

A 2-year-old girl is in stable condition with leg injuries after being struck by a truck pulling a travel trailer Monday morning at Mooshine Park in Logsden.
Read more

Can anyone explain the thought behind putting excessive crosswalks on Highway 101?
Read more

Motorists reminded to move over for stopped emergency vehicles

Every day, law enforcement officers and emergency workers put their lives on the line to save ours. Even a routine traffic stop has become risky business.
Read more
BREAKING NOW