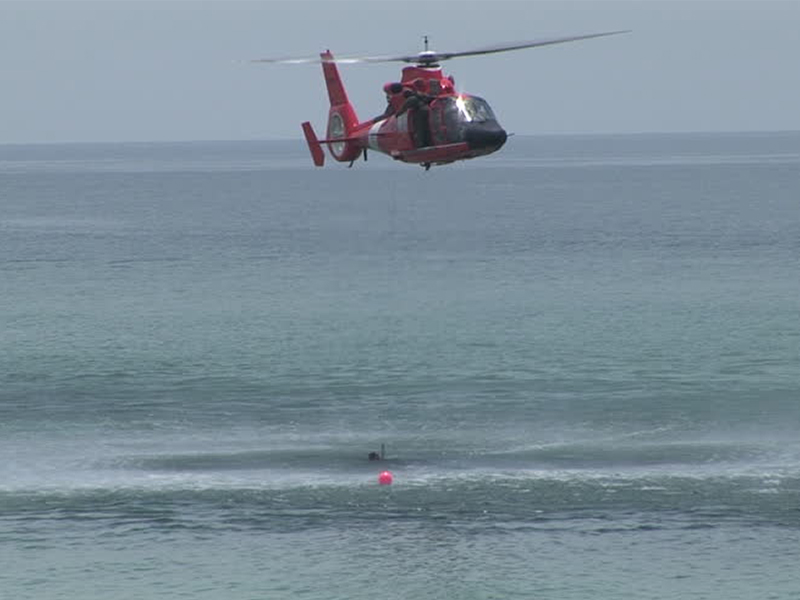 Investigators said Miaochan Chen, 49, and Wenjun Zhu, 41, reportedly married, were visiting the Oregon Coast from Lake Oswego with their 10-year-old daughter. The family was picnicking off Otter Crest Loop when the group took a trail down to rocks overlooking the ocean. A wave washed over the rocks and swept Chen and Zhu into the sea. Their daughter was unharmed.

An MH-65 Dolphin helicopter crew from Coast Guard Air Station North Bend spotted and hoisted the unresponsive Chinese couple from the water and transported them to Emergency Medical Service Technicians waiting on shore, where the male was confirmed dead.

Coast Guard Sector North Bend Command Center watch-standers received a request for assistance from 9-1-1 dispatch at 5:31 p.m. regarding two people reportedly swept out to sea by a rogue wave while foraging for mussels.

A life flight request to the hospital landing zone was canceled and the woman was transported by emergency vehicle to Samaritan Pacific Communities Hospital.

Chen, Zhu, and their daughter immigrated to the United States from China in July, the OSP report said. Family members were notified with the help of the Chinese Consulate. The Department of Human Services-Lincoln County responded and placed the deceased parents’ daughter into a local foster home and will work with the families for her further placement.

The Coast Guard reminds all beachgoers, residents and visitors to the Pacific Northwest coast to always be aware of the dangerous conditions that exist on the coastline regions. Being aware of tidal changes and wave patterns can help you avoid these types of tragic situations.

Facebook correspondence relayed and confirmed Sunday to Homepage by Erich Knudsen of Information Station (information-station.news), a classified directory both online and in print based in Waldport: