Shorthanded Tigers fight on but fall to Sutherlin 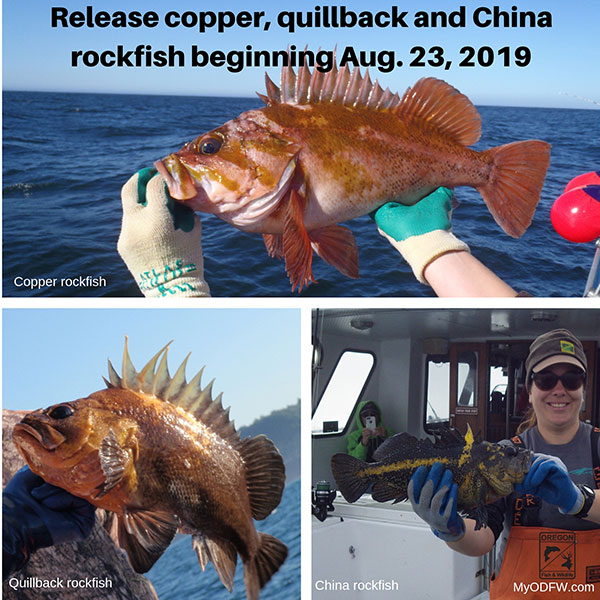 Anglers must release copper, quillback and China rockfish when fishing from a boat, beginning today as the harvest guideline for these species has been met.

Meanwhile, anglers may keep two Pacific halibut each day in the sport halibut fisheries in the Central Oregon Coast and Southern Oregon Subareas (subareas south of Cape Falcon to the Oregon/California border).

Copper, quillback, and China rockfish are the most commonly caught (and relatively easy to identify) members of a group of 11 nearshore rockfish species that are managed together, representing 98 percent of the total catch of that group. Other species in this group (including brown and gopher rockfish) are rarely caught and are not affected by the retention closure.

Recreational fisheries for other rockfish species, such as black, blue, and deacon rockfish, along with lingcod, also remain open. Harvest of these species is well within guidelines and no early closure of the bottomfish season is expected for the remainder of 2019.

Use of a descending device to release rockfish is required when fishing deeper than 30 fathoms, and recommended at any depth for fish that are not able to submerge on their own.

ODFW began working with anglers earlier in the month to voluntarily reduce catch of these species to stave off the need for additional action. “We had just started to reach out to the recreational fishing community with a request to not target copper, quillback, and China rockfish, and to consider releasing any caught by accident if they weren’t injured by capture or barotrauma,” said Maggie Sommer, ODFW marine fisheries manager. “We were encouraged to hear from some charters and anglers that they were making an effort to avoid these species and thank them for their efforts.”

However, updated fishery data for the first two weeks of August pushed catch estimates much higher than expected. The retention closure is needed in order to ensure that other fisheries aren’t affected, and the coastwide sustainable catch limit is not exceeded.

For rockfish identification tips including an ID quiz, visit https://myodfw.com/articles/rockfish-identification-tips

Meanwhile, because a substantial amount of the annual quota remains available in these areas, fisheries managers determined that the daily bag limit can be increased to two halibut per day. “We had some challenging weather and conditions this year that kept anglers in port during most of the all-depth weekends,” said Lynn Mattes, sport halibut project leader for ODFW.

The Central Oregon Coast Subarea summer all-depth halibut fishery is open every Friday and Saturday until the summer season all-depth quota of 57,941 pounds is taken or Oct. 27, whichever comes first.

As the Hunting & Fishing Correspondent for this otherwise urbane and sophisticated web site, I figured my latest writing gig was just a good excuse to scour the county for hot-spot intelligence from numerous pistoleros, grizzled charter operators and bartenders around Lincoln County.