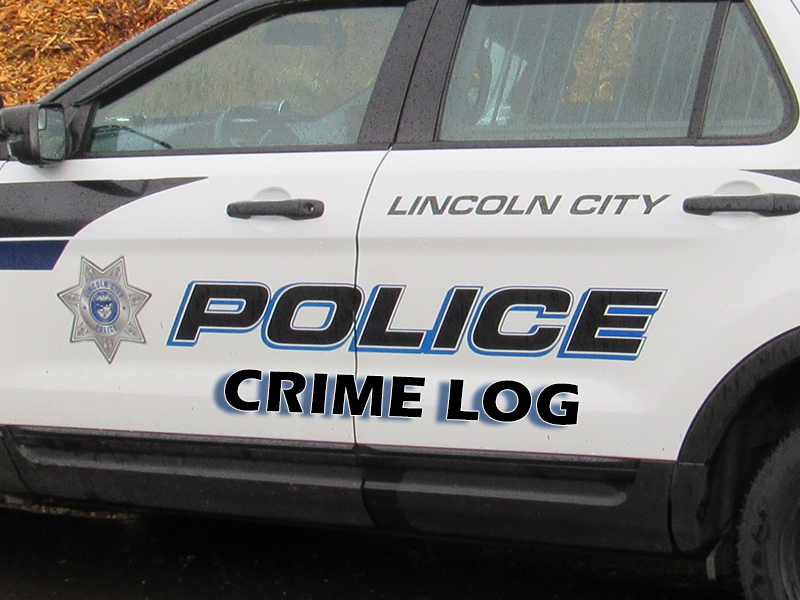 Missing Property – 10:25 a.m. – South Subway, 247 SW Highway 101 – Caller thought she had left her wallet on the counter and it had been possibly stolen. She called back and said she found her wallet in her vehicle.

Criminal Mischief – 4:07 p.m. – Safeway – A woman hit a vehicle with her shopping cart and left the scene but returned later.

Theft – 10:03 p.m. – Chinook Winds Casino – A juvenile lost a debit card at the store and it was used shortly after. Report taken.

Domestic – 7:54 a.m. – 1452 NE 6th Dr. – Report of a male attacking a female. Upon investigation, found female attacked the male and he was defending himself. Kimberly Salzillo (1/17/89) arrested for second-degree domestic assault and transported to Lincoln County Jail.

Robbery – 6:15 p.m. – 3109 NE 26th St., #303 – Caller reports a male suspect armed with a knife had stolen a bicycle. The victim sprayed the assailant with pepper spray and with the help of a maintenance person, detained the suspect until police arrived. Trevor Petricevic (8/12/90) was taken into custody for first-degree robbery and third-degree theft. He was transported to SNLH for evaluation and then to Lincoln County Jail.

Extra Patrol Request – SE 50th St. & SE 51st St. – Caller reports an older white SUV possibly an Explorer with stickers on the back has been parking at the bus barn and driving slowly around the neighborhood.

Vehicle Impound – 3:25 a.m. – Vehicle impounded for no driver’s license and no insurance. Towed by Care Care.

Fraud – 5:07 p.m. – Roby’s Furniture – Employee reported a customer paid for appliances with a credit card and then reported the transaction as fraud after they had been delivered.

Fraud – 3:24 p.m. – Bayhouse – Victim reports receiving a call from someone claiming to be from Pacific Power. The caller advised they would turn off his power because they switched to a new payment system and he was behind on payments. Payment was made with a Money Pack card available at Rite-Aid. Total loss of $1,498.42

Fraud – 4:43 p.m. – 3520 NE Highway 101 – Victim received a call from someone saying his Social Security number was stolen and there was a warrant out for his arrest from the Drug Enforcement Administration. Victim paid suspect by using Google Play cards.

Found Property – 5:29 p.m. – Citizen came into LCPD with a wallet found in Depoe Bay. Owner of the wallet had already called to see if it was turned in. Wallet returned to owner.

Suspicious Activity – 10:58 p.m. – City Hall – Report of two subjects in parking area throwing trash out of a city dumpster and throwing things around the parking lot. Jesanna Rothstein (9/22/87) taken into custody for offensive littering and P.O. detainer. She was transported to Lincoln County Jail and excluded from property for 30 days.

Nonprofit Oregon School Activities Association, the high school sports and competitive activities regulator, needs officials due to a recent decline because of COVID-19.