The Tigers found Hall open on the perimeter on numerous occasions and the junior guard hit four 3-pointers behind 10 team assists and just nine turnovers.

“Jordan was feeling it and kept sending it to the net from deep,” Taft  coach Andy Morgan said. “He could have been firing a cannon tonight. Jordan was hitting the target.” 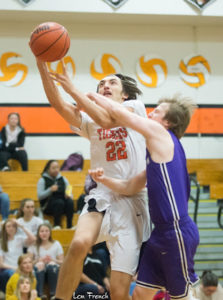 “This matchup was one of Tyee’s premier performances of the season,” Morgan said. “His game was complete, and his leadership and composure were very important.”

Morgan also credited the floor play of freshman Kaden Hindman, who made his first varsity start, and the all-around contributions of seniors Clay Nelson and William Brooks.

Details from the girls game were not reported. 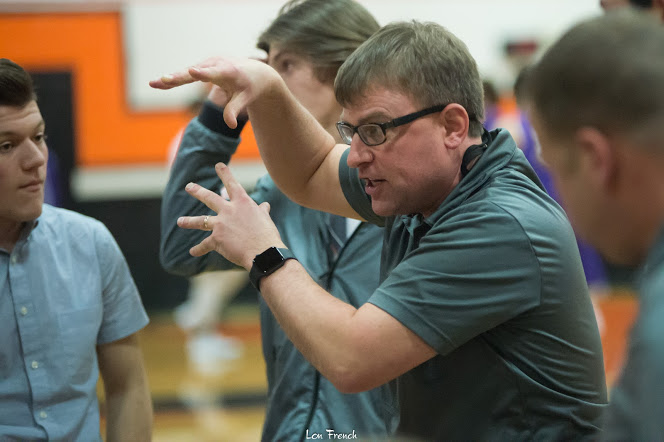 “Ten team assists, with only nine total turnovers. was the key to the game tonight. The Tigers have been averaging less than six assists in their league losses this season, while averaging over 20 turnovers during that same stretch. To correct these numbers was critical on the offensive end, which has really been the Achilles’ heel on this Taft squad.

“Another exciting number was the four 3-balls by junior Jordan Hall. The often selfish Tiger team noticed Hall was in the zone and they selflessly continued to feed him the ball. Jordan was feeling it, and kept sending it to the net from deep. He could have been firing a cannon tonight. Jordan was hitting the target. Six of nine active Tigers found their way to the scorebook, including eight from junior Trenton Fisher.

“The home Tigers started the game with freshman Kaden Hindman getting his first start at the varsity level. This younger Hindman brother has earned a spot on this roster by his commitment and curiosity. Kaden is the sole member of this squad to have perfect attendance at practice, and is never too shy to ask the smart questions that others fail to ask.

“A future leader, Hindman was eager to set the mood on the court for the return of his older brother, junior Lucas Hindman, who returned from nearly two months absence due to an injury to his potent shooting hand. The older Hindman brother was noticeably winded after chasing Warrenton shooting guard Dalton Knight.

“Knight scored 30 in Taft’s overtime loss to Warrenton in their first meeting of the year. Taft’s injured Graden Kehr held Knight to 17 in their second meeting — a Tiger win, 46-25. This time, with Kehr sidelined, sophomore Fco Ramos shared the responsibility with the returning Lucas Hindman. This time around, Warrenton’s Knight was held to four points, often frustrating the sharp shooter, eventually sending him to the bench.

The 12-point third quarter was the biggest disappointment on the defensive end for the Tigers. It was the team’s goal to hold the visiting Warriors to no more than nine points per quarter.

“While the Tigers were effective at holding Warrenton to under 36, the third period felt like a bit of a disappointment — allowing 12 in the frame.  Senior scoring leader Ray Darrington was basically neutralized by a barrage of double- and triple-teaming by the much smaller Warrior defenders.

“However, senior power forward Tyee Fisher picked up much of the slack, managing nine points, seven rebounds, and the stat of the night — six steals. This matchup was one of Tyee’s premier performances of the season. His game was complete, and his leadership and composure were very important, as he committed only three turnovers while handling the ball much of the night.

“Seniors Clay Nelson and William Brooks did not produce significant stats, but their presence and composure on the court were the perfect complement to some of the younger Tigers’ significant statistics. Brooks and Nelson added three rebounds, three points, an assist and much intensity on defense as Taft shifted gears often to keep visiting Warrenton on its toes.

“The Tigers look forward to the return of Kehr and junior Eli DeMello — who has been missing since the holiday break. The Tigers have managed a record of 2-7 since losing DeMello to a bone bruise during the team’s three-game trip to Central Oregon in late December.

“Looking forward to a road game Friday, the Tigers will welcome all the help they can get as they have been manhandled by the team from Rainier in their first two meetings of the year.

“Tonight’s victory was a good win for the home Tigers, who need some wins for a chance to make a league playoff. Taft may need some help from the other teams, but the Tigers will be focused on continuing to grow.”