In the Winter we watch nearly 20,000 gray whales from mid-December through mid-January as they travel south to the warm lagoons of Baja Mexico. 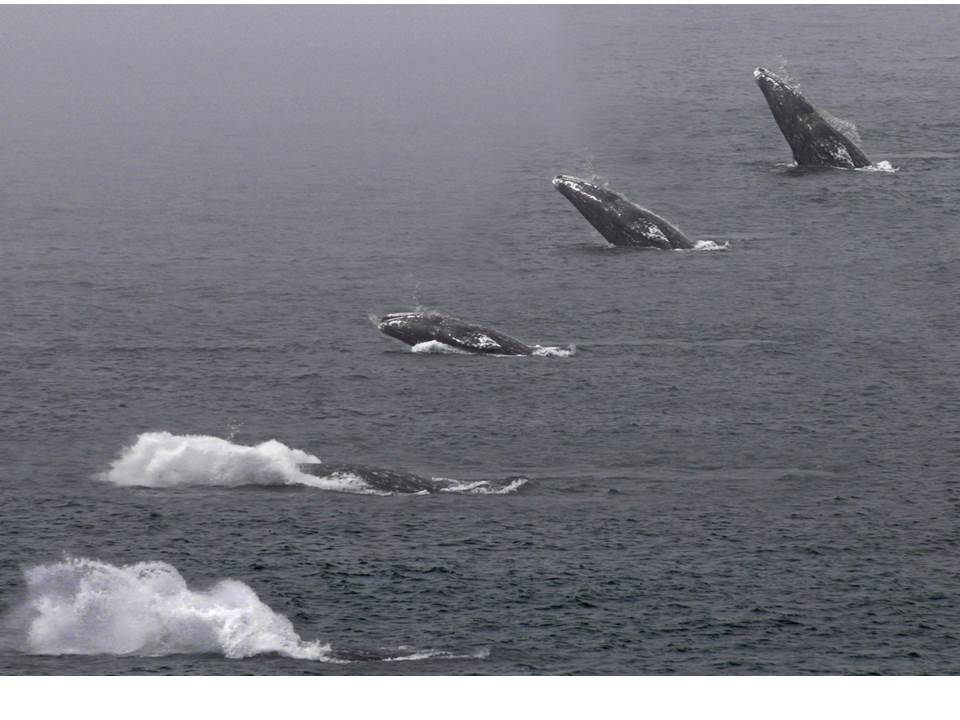 Gray whales are visible from Oregon’s shore nearly year-round, but two weeks every year are special! The winter and spring Whale Watch Weeks along the Oregon coast are recognized as some of the best opportunities to view the annual gray whale migration anywhere in the world.

The Whale Watching Spoken Here® program places volunteers at great whale watching sites during the two official watch weeks. Our official Whale Watch Weeks typically take place between the Christmas Holiday and New Year’s day and during the last week in March. For more than 30 years, our trained volunteers have helped visitors watch whales at sites in three states along the Pacific Northwest coast.

We definitely know whale watching. Learn more about whales at the Whale Watching Center in Depoe Bay year round, or join us at any of our locations during the Whale Watch Weeks for an amazing display of ocean life!

In 1978 Don Giles of the Hatfield Marine Science Center in Newport headed out to Yaquina Head Lighthouse with his binoculars and a great idea. Colleagues Bruce Mate and Denise Herzing were counting gray whales migrating past Yaquina Head. They confirmed what Don and others intuitively knew: Gray whale migrations along the Oregon coast peak during two special times of the year. The southbound migration happens during the winter holiday season, and the northbound has one of its two peaks near the end of March.

This knowledge motivated Don to create the Whale Watching Spoken Here® program. Since 1978, it has grown to become one of the most organized onshore whale watching programs in the United States.

Location: Thanks to the 1967 Beach Bill, public access is protected along virtually the entire Oregon coastline. In addition, most of the whale watching locations are located in or near state parks.

Abundant whales: Researchers estimate that 18,000-plus gray whales now live in the eastern north Pacific area. About 30 whales per hour migrate past the Oregon coast during the peak southbound migration. By comparison, six per hour pass by on the northbound trip, but that return trip is spread over four months. Some 200-plus of these whales drop off the migration route and feed along the Oregon coast all summer.

Timing: The migrations peaks coincide nicely with times when many visitors are able to visit the coast. Since the main emphasis is on volunteers meeting and greeting visitors interested in whale watching, Don Giles and another colleague, Bev Lund, coined the phrase, “Whale Watching Spoken Here.”

Volunteers: We have had the joy to work with thousands of volunteers since the programs inception. Today we are thankful to have over 300 active volunteers that make this effort possible.

We missed you whale you were gone

Gray whales are on the move south once again and Oregon Parks and Recreation is inviting everyone to Winter Whale Watch Week Dec. 27-31.
Read more

Spring Whale Watch Week returns to the Oregon Coast March 23-31 to celebrate more than 20,000 Gray whales expected to migrate north past Oregon over the next few months.
Read more

Gray whales are on the move south again this December and Oregon Parks and Recreation Department is celebrating the migration with the annual Whale Watching Week Dec. 27-31.
Read more

Lincoln City OR - Gray whales are migrating north past the Oregon coast and the Oregon Parks and Recreation Department (OPRD) invites visitors to...
Read more

The Oregon Parks and Recreation Department is seeking whale-lovers to participate in its Whale Watching Spoken Here program.
Read more