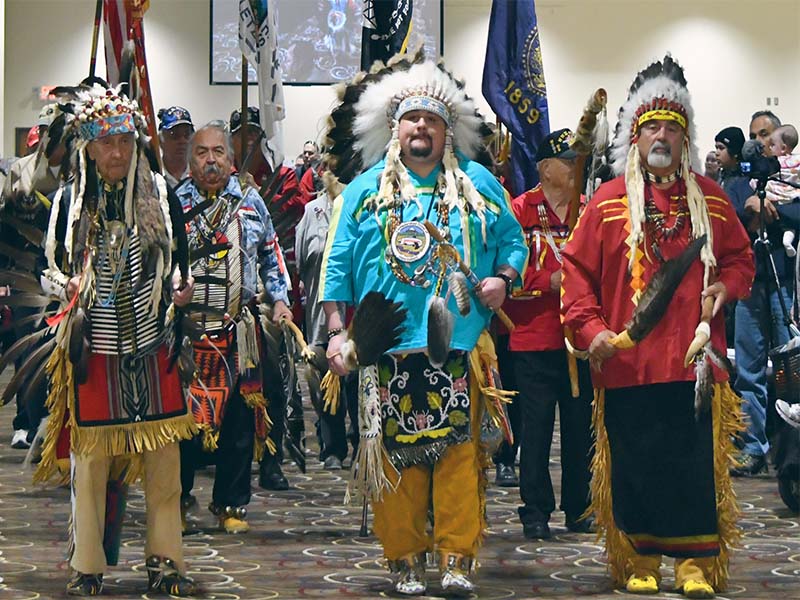 The public is invited to join the Confederated Tribes of Siletz Indians on Saturday, Nov. 16, as it holds its annual Restoration Pow-Wow at Chinook Winds Casino Resort in Lincoln City.

This free event begins with a grand entry at 6 p.m. American Indian vendors with jewelry, beadwork and other items for sale will be available throughout the day.

This is the 42nd year the Siletz Tribe has celebrated the signing of Public Law 95-195, which re-established government-to-government relations between the Confederated Tribes of Siletz Indians and the federal government. The Siletz Tribe was terminated from federal recognition in August 1954.

In the late 1960s, it became apparent that the only way to preserve and revitalize Siletz Tribal sovereignty, community and culture was for the Siletz Tribe to regain its status as a Tribe recognized by the United States.

In November 1977, after years of intense lobbying, Congress and President Jimmy Carter approved Public Law 95-195, which reinstated recognition of the Siletz as a federal Indian Tribe. The Siletz Tribe was the second in the nation – and the first in Oregon – to achieve restoration.

Dedicated to improving the quality of life of its more than 5,400 members, the Tribe puts strong emphasis on the education, health and social well-being of all its members.

Significant Tribal accomplishments since Restoration include opening the original health clinic in 1991 and a new much larger clinic in 2010; building more than 150 homes and multiple dwellings for Tribal members, including 28 units at Neachesna Village in Lincoln City that have opened since 2009, 19 apartments in Siletz that opened in

The Siletz Tribal Arts & Heritage Society (STAHS) was formed in 2013 as a nonprofit to enhance the Tribe’s ability to develop the Siletz Tribal Cultural Center. STAHS also helps the Tribe with acquiring object and archival collections.

The Siletz Tribe has honored its tradition of sharing within the community by distributing more than $17.6 million through the Siletz Tribal Charitable Contribution Fund and other Tribal resources. Chinook Winds has donated more than $6.5 million in cash and fundraising items since 1995. It also provides in-kind donations of convention space for various fundraisers as well as technical support, advertising and manpower for events.

The community is invited to join Siletz Tribal members and friends Friday-Sunday, Sept. 6-8, for the 24th annual Run to the Rogue.
Read more

The Siletz Tribal Charitable Contribution Fund distributed $325,626 to 65 organizations on Aug. 2 as it continued its quarterly donations to nonprofit groups.
Read more

The annual Nesika Illahee Pow-Wow, held by the Confederated Tribes of Siletz Indians, takes place this year on Aug. 9-11 in Siletz.
Read more

The Siletz Tribal Charitable Contribution Fund distributed nearly $283,000 to 63 organizations on May 3 as it continued its quarterly donations to nonprofit groups. The...
Read more

In a resolution passed March 15, the Tribal Council of the Confederated Tribes of Siletz Indians made official its opposition to the planning, approval,...
Read more

A grant from the Oregon Department of Land Conservation and Development (DLCD) will assist Lincoln County, its cities and the Siletz Tribe in addressing regional housing issues.
Read more

Lillie Butler, Bud Lane and Delores Pigsley were reelected Saturday to the Tribal Council of the Confederated Tribes of Siletz Indians.
Read more

The Siletz Tribal Charitable Contribution Fund distributed more than $180,000 to 57 organizations earlier this month as it continues its quarterly giving to nonprofit groups that now exceeds $16 million in overall donations since 2001.
Read more
BREAKING NOW