Lincoln City Mayor Don Williams will not run for re-election this November due to health concerns for his wife, Debbie.

“It’s a rare honor to be a mayor. Lincoln City is where I have always wanted to be and where I will end my days,” Williams said. “It has been a privilege.”

In a Facebook post citing Rick Beasley’s Newport News Times article, Williams explained his decision to not seek any office this year. Williams’ wife underwent emergency surgery to repair a serious internal issue and Williams will be providing care for her. Subjecting Mrs. Williams to the rigors of a political campaign would not be right, Williams said.

Williams said he will declare support for candidates in the future and will work diligently to support their election.

Williams said he plans to stay involved in local and state politics and looks forward to possibly serving again. 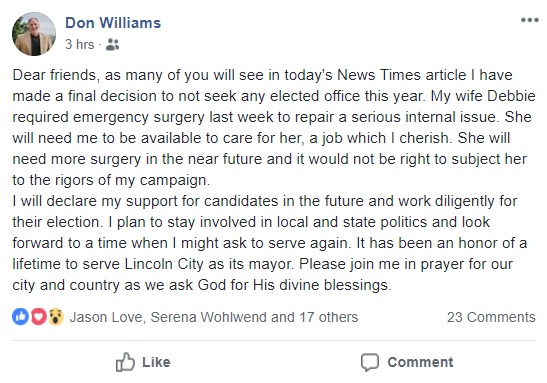 Former Lincoln City Mayor Don Williams took to Facebook Saturday with a video that shows a man making off with charity funds from his Redemption Thrift store in Taft.
Read more
00:05:23

Am emergency distress call is likely to credit for saving the lives of two recreational boaters this morning near Netarts Bay, five miles southwest of Tillamook.
Read more
Letters to the Editor

The City of Lincoln City needs to fill over 20 vacancies left by outgoing volunteers for various committees and boards.
Read more
Local News

Boy Scout Troop 47 is having a Christmas tree fundraiser at the Lincoln City Cultural Center to pay for the Scout's summer camp.
Read more
Crime

Newport Police Officer Hayden Randall and his partner, K9 Nero, were responsible for discovering a commercial quantity of methamphetamine during a routine traffic violation...
Read more