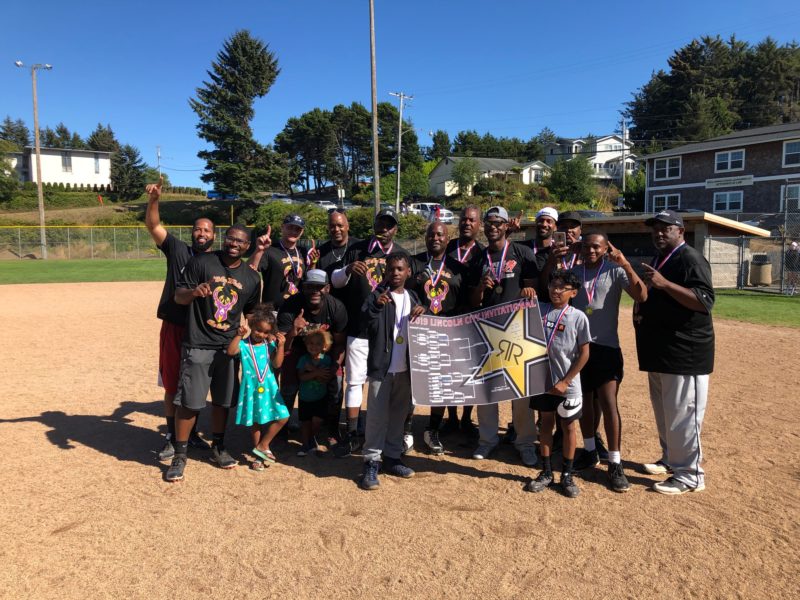 Balls were mushed and blood was shed at the tournament that is an economic boon for Lincoln City every year. An estimated 500 people came from the Valley for the event at Kirtsis Park, and several players showed off wounds from sliding on the gravel infield.

Billy Webb’s Elks played four total games, winning each, to be adorned with the gold medals. The team is comprised of teachers, an athletic director, a principal, a vice-principal and a Clackamas Community College baseball player named Jamaal Goodlow, who was named MVP for his hitting, base running and defense in left field. The team showed Goodlow its appreciation by showering him with water bottles during an on-camera interview after the win.

St. Johns, last year’s tournament winner, battled from the losers’ bracket, playing seven games to make it to the title game, only to lose by a couple of runs to the upstart Elks.

St. Johns was not upset by the loss and congratulated Billy Webb’s Elks in sportsmanlike fashion with customary mushball hugging and high-fives.

“I’ve been playing this game since I was 14 years old,” St. Johns captain Sam Porter said. “Its been a part of my life — my whole life — and its brought me dear friends. All of these guys are good dudes. A very solid core of good people.”

The Lincoln City team then faced St. Johns, who put more runs on the board as the sun broke through the clouds, eliminating the local mushball team.

Billy Webb’s Elks will have bragging rights until next year’s tournament, which players said they hope will be held in Lincoln City.

Scores of mushball players and their fans descended upon Lincoln City Saturday for the annual two-day Lincoln City Invitational tournament at Kirtsis Park.