People who do not qualify for the Oregon Health Plan or get insurance through their employer now have until Tuesday at 11:59 p.m. to apply for a subsidized health plan at HealthCare.gov.

The Marketplace is a part of state government that helps connect Oregonians to coverage. It partners with HealthCare.gov, the website where people apply for federal subsidies.

After Tuesday night’s deadline, people will be able to buy subsidized health insurance only when they lose access to other coverage or have a major life change, like adding a child to their family.

The state is enjoying one of the longest stretches of economic growth in its history – and Oregonians expect things will get even better before they eventually cool off. That’s the finding of a new poll conducted on behalf of Oregon Business & Industry, the state’s largest business association.

Conversely, recent data shows Oregon job growth is slowing and manufacturing may be in a recession, two of many signals that the economy has cooled off. Still, most respondents don’t see any decline in their own situation and don’t expect one soon. Half of Oregonians say they’re better off now than they were a year earlier, and a slightly larger number expect to be better off a year from now than they are today.

Looked at another way, Oregon is generating much more tax revenue than our state economist expected. About $1.5 billion more. More people are working and more people are earning. So while no one pays a higher tax rate, additional tax revenue is received. Under Oregon’s unique “kicker” tax law, when more revenue is received than expected, taxpayers get a refund. Watch for that reduction when you file taxes in early 2020.

In previous newsletters, I reported that Oregon has more than made up for job losses in the natural resource sector with new jobs in tech fields. But 80% of those new jobs are in the Portland area. In southern and coastal Oregon, 72% of respondents think kids will have to move out of their region to find good jobs.

Here’s another aspect of our curious economy. The number of older workers has quadrupled and one-fifth of Oregonians over 65 are working or seeking work. We are living longer and staying healthy. Many people enjoy their jobs and are happy to keep working and keep earning. But at the same time, Social Security only covers 40% to 50%  of what workers earned before retirement. Only 4% of private-sector workers have pensions and half of American households have no retirement savings. The sad truth is that many Oregonians can’t afford to retire.

In our district, 30% of the population is over 65. Older workers are more common in rural counties where they sometimes constitute more than 10% of the total workforce.

When a jury in Linn County determined in November that the state had breached its contract with 13 rural counties by failing to maximize logging revenues on state land, the damage award was breathtaking. $1,065,919,400.

The state plans to appeal. But the clock is ticking on the largest-ever legal award against the state of Oregon. The judgement, when filed, will accrue interest at 9% annually, adding an additional $96 million a year to the tab while its out on appeal.

Oregon’s state forests are mostly made up of lands that were originally logged over or burned by wildfire. Without the resources to rehabilitate the lands, 15 so-called “forest trust land counties” subsequently deeded the forests to the state. In exchange, the state agreed to replant the forests, protect them from fire, and share a portion of the timber harvest proceeds when they returned to productivity.

The state was supposed to manage the forests for the “greatest permanent value of such lands to the state.” The jury found that the greatest permanent value was synonymous with maximizing timber production. Three-quarters of the money would flow to three counties and be disbursed among local taxing districts, which include schools, ports, libraries and fire districts. Those three counties are Tillamook, Clatsop, and Washington.

If the verdict is upheld, the obligation falls to Oregon taxpayers. Effectively, that makes it a transfer from Oregon’s populous urban counties to its timber-dependent rural communities. But if you consider the portion of the award that would be borne by taxpayers in each county, paying the bill would effectively create a net loss for more than half of the counties who signed on to sue the state, according to an analysis by The Oregonian. Read more of this consequential story here.

What’s the Deal on Real ID?

The countdown is on for the Real ID Act to take effect and most Oregonians aren’t ready for the change. Starting October 1, 2020, TSA agents will stop accepting standard driver’s licenses as a form of identification to board flights. You will either need a new license or a US Passport.

The Real ID Act was passed by Congress in 2005, based on recommendations from the 9/11 Commission. The proposed standards require you show a US Birth Certificate, a US Passport, or a Certificate of Citizenship or Naturalization.

Oregon will start issuing Real ID compliant licenses in July. Oregonians who request the cards will receive a license similar to what they may already have, but the Real ID-compliant card will include a star in the upper right-hand corner.

An estimated 3.25 million Oregonians have current driver’s licenses. DMV officials say the agency issues roughly 600,000 to 700,000 renewals, replacement cards and motorcycle endorsements every year which are good for an eight-year period.

But now, transportation officials estimate that 960,000 of us may want Real ID. New requirements could add 8 minutes to every transaction, not including the waiting time in the lobby or the 10-plus minutes usually needed to go through the license application process.

Translation: Our local DMV offices are going to be swamped!

A final cost for the Real ID card will likely be around $20. That is in addition to the $40 fee for a general license renewal. And if you are like me or Susan who got our renewals in 2019, yes, you will have to pay for another renewal to get the Real ID license in 2020. The good news is you will also get a new photo!

If you do not have all the necessary documents, you can still get a driver’s license with proof of residency. But it will not be Real ID compliant. And without a Passport, you’d have a hard time getting on a plane.

If you are not confused enough already, let me add this: Oregon will now have two forms of driver’s licenses – one with the star and one without. Some have asked me if this means non-citizens can get licenses. Yes. But they will not get Real ID and will not be registered to vote through our motor-voter procedures.

The state is in the midst of installing new computer systems at all DMVs and offices will begin training in April on the new Real ID software. The legislature approved funding for new DMV employees to help with the expected demand. But if you need something from DMV other than the new Real ID, I urge you to plan ahead. Go see them before July if you can. Planning to travel? Consider getting a Passport too. 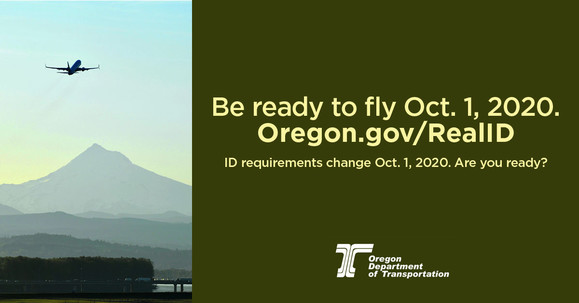 Federal changes to the Supplemental Nutritional Assistance Program (SNAP) mean at least 19,000 Oregonians could lose government food assistance, according to the Oregon Department of Human Services.

The rule, set to take effect April 1, means adults would not receive benefits for more than three months in a three-year period if they aren’t working or training for at least 20 hours a week. Those restrictions will apply to “able-bodied adults without dependents.” In rolling out the SNAP benefit changes, federal officials said they’re intended to move people toward “self-sufficiency.”

Most Oregon counties can now issue waivers to extend SNAP benefits for longer than the three-month time restriction. That is changing too. Under the new rule, Lincoln, Tillamook, Yamhill and Polk Counties would no longer be able offer waivers.

If you have comments on these benefit changes, I encourage you to share them with Congressman Schrader along with Senators Wyden and Merkley.

What will happen to your automatic online payments, your email, your photos, social media, or your PayPal account if you unexpectedly pass away?

At any given time, the average American maintains between 30 and 50 online accounts. These may be with banks, financial institutions, utility companies, email providers, social media outlets, commercial shopping or travel sites and music accounts or smartphone apps.

Digital estate planning is a new and rapidly changing field. By incorporating an ePlan into your estate plan, you can ensure that your executor will take the right steps to preserve and protect these accounts and that valuable and sentimental data can be passed on to family and loved ones.

December is particularly busy. In the past week, I danced at the Angels Ball in Lincoln City and dined at the Pacific/Nestucca Chamber Gala, attended the Surfrider Holiday Party, served as MC for the Pacific Communities Health District Foundation Gala, joined the state Farm Bureau meeting at Salishan, chaired the Coastal Resilience Workgroup in Coos Bay, participated in a meeting of the Governor’s Commission on Senior Services, and drove to the Oregon Business Plan Summit in Portland.

Have a wonderful Holiday Season and New Year.

Oregon House Rep. David Gomberghttps://www.oregonlegislature.gov/gomberg
David Gomberg (D-Otis) represents House District 10, which includes Yachats, north to Tillamook along the coast, and inland as far as Sheridan and Falls City to the east.

Dear Friends and Neighbors, Over the course of four years, I worked with Dr. Bruce Mate at the Marine Mammal Institute to authorize a Coastal Playground gray whale license plate.
Read more

Oregon House Representative David Gomberg has been cleared of any wrongdoing by the House Special Committee on Conduct in response to a woman who said she overheard him "joking" about a prostate cancer treatment at an annual industry dinner in 2019.
Read more

Oregon State Representative David Gomberg will be holding a series of town halls in March and April where the public is invited to share concerns, ask questions and review the recently concluded legislative session.
Read more

With the new year, comes the implementation of new laws approved by the Oregon State Legislature in 2019.
Read more

There’s much to be thankful for in House District 10

Last week saw a flurry of activity in the Capitol as we convened for November Legislative Days.
Read more

As you know, I’ve been working over several years to improve how we collect money owed to the State of Oregon.
Read more