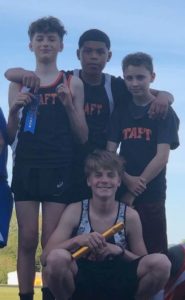 Mario Cortes, MaKaden Melton and Rulon Porter teamed with Koceja to claim the 4×400 relay title, while Melton was second in the 100-meter hurdles and third in the 400-meter run in 85-degree heat at Yamhill-Carlton High School.

Seventh-grader Aliviah Mode was third in the girls 200-meter dash for the Tigers.

Meanwhile, Dylan Stutzman won the 800-meter and 1,500-meter run for the boys, and Julia Towers was second in the 800 and third in the 400 for the girls in the CVL’s Sixth Grade Districts, held Monday, May 6, at Sheridan.

Several Taft High track and field athletes arranged a date with State this week at the Class 3A Special District 2 Track and Field Championships at Dayton.
Read more
Sports

Taft High sophomore JJ French won the pole vault with a leap of 12 feet, 6 inches Tuesday to qualify for State on the...
Read more
Features

It will be “Anchors Aweigh” in more ways than one this week when Taft High senior David Jin hurdles his way into the Class 3A Special District 2 Track and Field Championships in Dayton.
Read more
Sports

The Taft High track and field team, fresh off participation Saturday in the prestigious Prefontaine Rotary Invitational in Coos Bay, will host a Special...
Read more

Welcome to the future of the Internet. Whatever your plan is, we make it simple to win.