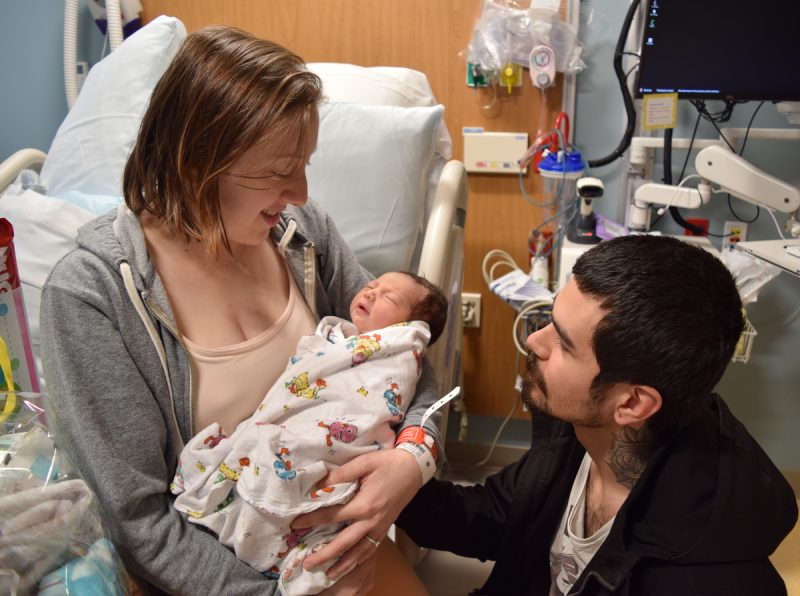 The first baby born in 2023 at a Samaritan Health Services hospital arrived in Lincoln City at 12:58 a.m. on Sunday, Jan. 1, followed a few hours later by the first baby of the year in Newport.

With three different possible due dates, Nicole and Ricky Nava weren’t sure what side of New Year’s Day their little girl would choose to arrive – 2022 or 2023. In fact, when Athena Jade-Louise was born at Samaritan North Lincoln Hospital just 58 minutes into the new year, she became the official “New Year Baby” for all of Samaritan’s five hospitals in Benton, Lincoln and Linn counties.

At birth, Athena weighed 7 pounds, 3 ounces and was 20 inches long. She is welcomed home by big brother Damian, age 4. OB/GYN Meredith Mann, DO, was the presiding physician at the birth.

Although Nicole and Ricky are both from California originally, they didn’t meet until they each moved to Lincoln City several years ago. They currently live in Lincoln City where they are very busy tending to their preschooler while working and going to school. Nicole is employed at Tidal Raves in Depoe Bay and Ricky works at Salishan Coastal Lodge while studying to be a licensed massage therapist.

All new parents at the hospital receive a special celebration meal of their choice. Also, the first baby of the new year and family received many other gifts from the hospital compliments of the North Lincoln Hospital Foundation, SNLH Auxiliary and SHS Marketing.

The second Samaritan baby of the new year was Elias Rafael Hernandez Hernandez. Born at Samaritan Pacific Communities Hospital, he arrived at 8:34 a.m. on Sunday, Jan. 1. He weighed 9 pounds, 10.8 ounces and was 20.5 inches long. OB/GYN Jennifer Brewer, MD, was the presiding physician at the birth.

Elias was welcomed by parents Monica Hernandez Morfinez and Ramiro Hernandez Lezama, along with an 8-year-old sister and 5-year-old brother. All three of the couple’s children were born at Samaritan Pacific Communities Hospital and Monica and Ramiro both work at Pacific Seafood in Newport. Speaking through a language interpreter, Monica said she would stay at home to care for their newborn. Ramiro also added that their daughter had the chance to meet baby Elias and “she was very happy” with a second baby brother.

While all new parents at the hospital receive a special celebration meal – with their baby’s footprints inked onto the paper menu – the first baby of the new year and family received many other gifts including a car seat, pack-n-play, a case of diapers and other fun and useful items.

Samaritan Early Learning Center in Lincoln City has been approved by the state to provide emergency child care for a prioritized group of essential workers.
Read more