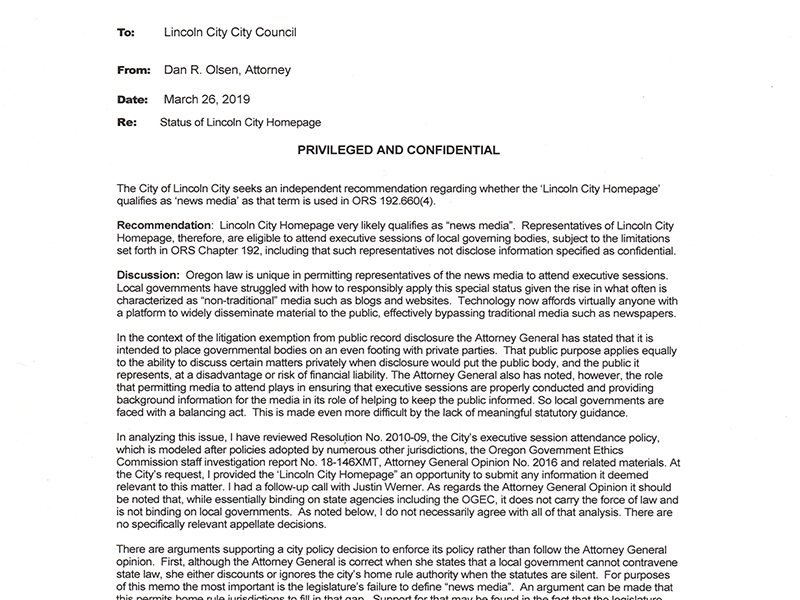 The 5-0 vote ends a 10-month process that included an Oregon Government Ethics Commission (OGEC) investigation confirming Homepage as a qualified and viable news representative; dismissal of the case by OGEC due to jurisdiction issues; Council development of an application process for new media; and the hiring by Council of a third-party hearings officer to review the matter and share his findings.

In his report to Council, attorney Dan R. Olsen of Portland, determined:

Although not on the initial agenda for its regular Council session, Mayor Dick Anderson and councilors Diana Hinton, Rick Mark, Diane Kusz and Judy Casper voted Monday to accept Olsen’s recommendation to recognize Homepage as a bona fide news source and approve its application to attend executive sessions.

Councilor Riley Hoagland, who said he had not seen the confidential report, abstained. Councilor Mitch Parsons, who opposed the hiring of a hearings officer in addition to Homepage’s compliance with a newly developed application process, was excused.

Council then voted to make public and not redact any of Olsen’s report, with only Casper objecting. Council reiterated that a no disclosure agreement be made clear at the start and/or end of the special sessions, and that any Homepage representative other than Publisher Justin Werner or Executive Editor Jim Fossum provide verification of their affiliation with the news organization.

Under its newly adopted media policy, Council cannot hold an executive session while there is an application pending.

Citing the need to avoid a perception of bias, the Council opted on March 11 to forego consideration of an agenda item to hear a short presentation from Werner and review his organization’s application in favor of obtaining outside consultation. Under state law, recognized media is allowed to attend but not record or report on discussion in executive sessions.

Prior to that, in mid-January, an OGEC investigation found that Homepage qualified as legitimate media and was barred from a Council meeting last summer in violation of state law.

“There is a preponderance of evidence that a representative of the news media [Werner] was excluded from attending an executive session held by the Lincoln City City Council in violation of ORS 192.660(4),” OGEC Compliance and Education Coordinator Diane Gould said.

However, citing jurisdiction issues, OGEC’s Board of Directors bypassed its own investigation’s findings and dismissed the case in late January.

Homepage maintained it was illegally excluded from attendance at a June 4, 2018, special session under Oregon public meetings law because it regularly covers Council meetings and local government and corresponds regularly with City officials to report the news.

The findings countered City claims that Homepage did not meet screening criteria as a media representative and needed to gain approval or give advance notice for attendance at the executive session. 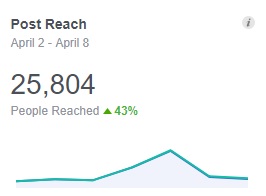 Homepage has experienced more than half a million hits in the past year with tens of thousands of users from across the United States and is projected to exceed one million by the same time next year.