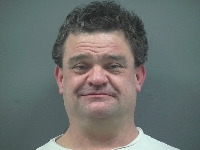 Inmate Joshua Gilleo of Depoe Bay was discovered by Jail staff in his private cell at approximately 10:27 p.m., and CPR, including use of a defibrillator, was immediately administered. The subject was pronounced dead by paramedics called to the scene.

The subject was lodged in the Lincoln County Jail on charges of Unlawful Use of Weapon; Endangering a Person Protected by a Family Abuse Prevention Act (Restraining Order), Possession of Prohibited Firearm, Menacing and Contempt of Court x 3. Total security was $135,000.