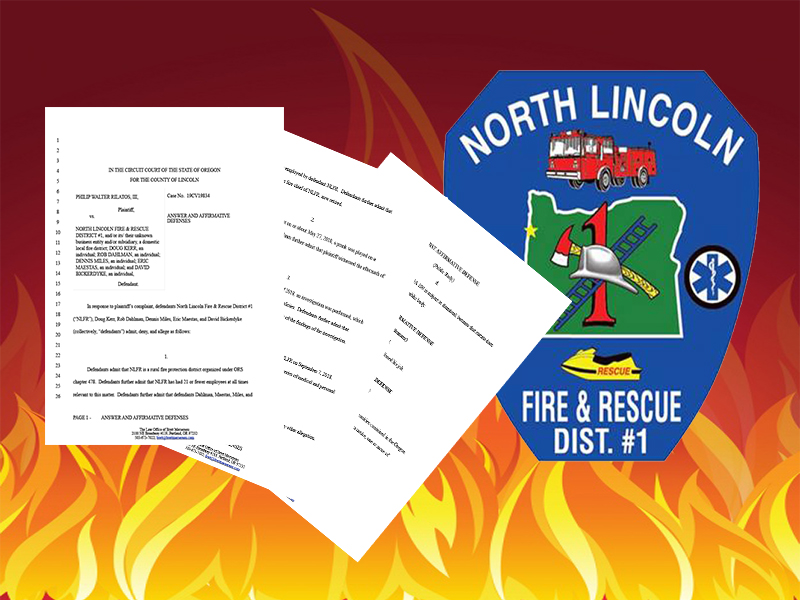 Defendants in a $2 million discrimination lawsuit against North Lincoln Fire & Rescue District #1 maintain a former firefighter was not the intended victim of a sexually explicit prank and abandoned his job following an off-work injury and several medical and personal leaves.

Philip Rialtos, who has filed a multimillion dollar complaint alleging he was terminated as a form of retaliation for reporting a sexual harassment claim, is seeking a jury trial and the firing of NLFR interim Chief Rob Dahlman.

— The plaintiff witnessed the aftermath of a prank intended for another firefighter on about May 27, 2018;

— An August 2018 investigation deemed the prank in violation of NLFR policies and that discipline was imposed on employees as a result of the findings;

— The plaintiff last worked for NLFR on Sept. 7, 2018, and voluntarily left his job following an off-work injury and series of medical and personal absences.

The lawsuit maintains the plaintiff’s employment claim is subject to dismissal because the statute does not apply due to NLFR’s status as a public body.

The papers further indicate that the defendants “deny each and every other allegation, matter and thing set forth in plaintiff’s complaint.”

Court documents filed in Lincoln County Circuit Court by the firm Ersoff and Zantello on Rialtos’ behalf allege sexual discrimination and harassment by several local firefighters and claim “a clear form of retaliatory behavior” against Rialtos, who the papers claim was fired April 23.

The suit seeks judgments as follows:

According to a report by private investigator D. Craig Stoelk of Stoelk Investigation and Consultation, LLC, of Salem, four incidents of alleged indiscretion in violation of employee policy against a worker occurred: