Scott won the javelin with a throw of 151 feet, while sprinter Arce-Torres won the 200- and 400-meter dashes, and distance specialist Nightingale captured the 3,000-meter run.

The Class 3A Tigers, who will compete May 11-12 in the West Valley League Championships in Dayton, outdistanced Class 4A Yamhill-Carlton 139.25-106 for the boys’ title.

The Taft girls, who were led by sophomore Ella Knott’s victory in the javelin, finished fifth behind winner Southwest Christian.

“I’m thrilled with how competitive our group has been all season, and thankful for the many hours the coaching staff has worked with the kids,” said Taft Coach Joey Arce-Torres, who also credited Athletic Director Bart Rothenberger for the success of the school’s spring sports programs. “I’m overwhelmed by the dedication the athletes have shown.”

Sophomore Kaden Wright finished second for the boys in the 100-meter dash, while Nightingale was runner-up despite a personal-record time in the 1,500.

Junior Micah McLeish was second behind Nightingale in the 3,000, freshman JJ French tied for second in the pole vault, and sophomore Elin Fitch was second with a personal-best leap in the triple jump.

Junior Savannah Russo, who PR’d in the 400, was third in the javelin.

Biddle also won the shot put and was third in the javelin to help the Taft boys finish third behind winner Yamhill-Carlton. The girls, with Hankins finishing second in the javelin, placed sixth behind champion Dayton. 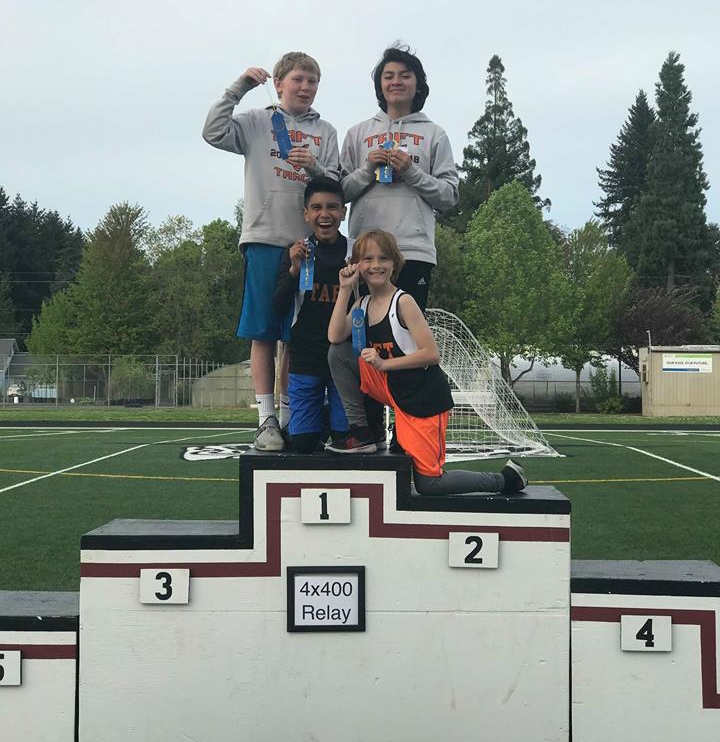 On Tuesday, Taft placed third behind Amity in the boys competition and fourth behind the Warriors in the girls at the Coast Valley League Faulconer-Chapman middle school meet in Sheridan,

The Tigers will host the Coast Valley League’s 7th/8th Grade District Championships on Monday, May, 7, at Voris Field.