Amity High proved there’s nothing phony about its No. 1 ranking in small-school Oregon football Friday, rolling to a 48-0 halftime lead before a running second-half mercy clock expired on a 48-7 Special District 1 West Conference victory over Taft at Voris Field.

The Warriors scored on a 74-yard run on the game’s first play to improve to 5-0 with its fifth straight dominating victory, while the Tigers fell to 1-4.

Taft wide receiver Fco Ramos scored Taft’s only touchdown on a short pass from fellow sophomore Antonio Saurez as the clock wound down on the game.

The Tigers return to action in another Class 3A SD1 West Division league game at 7 p.m. Friday at Clatskanie.

Amity scored on a 74-yard run by senior running back West Streeter on the game’s first play and converted the two-point conversion for an 8-0 lead.

Taft punted the ball back to Amity after going nowhere on its first possession. Amity took possession on its 36, but was forced into a fourth down, where Streeter gained 13 yards to the Taft 30. Senior running back Brian Hatch broke up the middle for a first-and-goal at the 5, where he scored on the next play to make it 14-0 following a failed two-point conversion pass.

Taft took possession at its own 29 on the ensuing possession and converted a first down on a 10-yard pass from senior quarterback David Jin to sophomore wideout JJ French. French gained 19 yards on another reception from Jin inside of Amity territory.

Jin hit senior wide receiver Tyee Fisher to the Warriors’ 30 yard-line. Fisher made it back-to-back receptions to the 20, where French hauled in a pass from Jin for first-and-goal at the 3. After a run went nowhere and two passes fell incomplete, the Tigers went for the touchdown rather than attempt a field goal and turned over possession on another incompletion.

Streeter ran for 40 yards from his own 3 to move the ball to near midfield. Hatch then ran to the Taft 30, and again for a score from the 19 and a 22-0 lead after the two-point conversion pass culminated a 97-yard drive.

Taft failed to move the ball and punted to the Warriors, who fumbled the return and the Tigers took possession on Jin’s recovery at the Amity 29.

Taft again surrendered possession after failing to convert on fourth down on the first play of the second period. Amity assumed possession at its own 20. Streeter then ran 58 yards for a score to make it 28-0 after the conversion attempt failed.

Amity recovered a Taft fumble on the ensuing kick at the Tigers’ 25, where the Tigers forced a fourth-and-long situation before Streeter managed to gain just enough for the first down at the 15. Junior running back Cody Dyche scored a couple of plays later to make it 35-0 after the point-after midway through the quarter.

Taft took possession following the kick at its own 34 with about seven minutes to play in the opening half. A reception by senior receiver Logan McLendon left Taft a yard short for fourth down before the Tigers gave the ball back to the Warriors at their own 43 with 6:34 left before intermission.

Streeter ran through the Taft interior into Tiger territory and Amity powered its way inside the red zone, before Streeter walked in for his third touchdown from the 10 and a 42-0 lead after a successful PAT.

An interception set Amity up deep in Taft territory moments later before the Warriors bullied their way to the 1 inside of two minutes. Dyche scored his second touchdown of the game from there to make it 48-0 just before half after the Warriors took a knee in a show of sportsmanship.

Oregon’s 45-point “mercy” rule brought on a running clock for the remainder of the game.

Taft took possession of the second half kick behind backup sophomore quarterback Antonio Suarez, making his first varsity experience following an injury to Jin late in the second quarter.

The Tigers failed to move the ball but regained possession on a recovered fumble moments later. Taft again went three-and-out as the running clock breezed to the midway point of the quarter. Another fumble recovery by Taft gave the Tigers possession on the ensuing series.

The Tigers went nowhere from there and turned the ball over on downs near midfield. Amity took possession inside of three minutes as both teams underwent some personnel changes with the game out of hand.

Two running plays gave the Warriors a first down before the clock expired on a scoreless third quarter.

Taft held Amity on downs on the period’s first possession before French ran for 11 yards to his own 15 for a first down with 7:23 remaining. French caught a 13-yard pass from Saurez for another first down to the 26.

A roughing the passer call following a 17-yard reception by sophomore Fco Ramos moved the ball up field before the Tigers advanced the ball inside the Amity 30. Taft junior running back Logan Gilleo gained another first down on a pass from Saurez for a first down.

Ramos then caught a 12-yard pass from Saurez for first-and-goal inside the 5 with two minutes left. Saurez then hit Ramos in the end zone on the next play to make it 48-7 with 1:17 to play.

Amity recovered an onside kick and ran out the clock from there.

This post was updated after every quarter and periodically in between 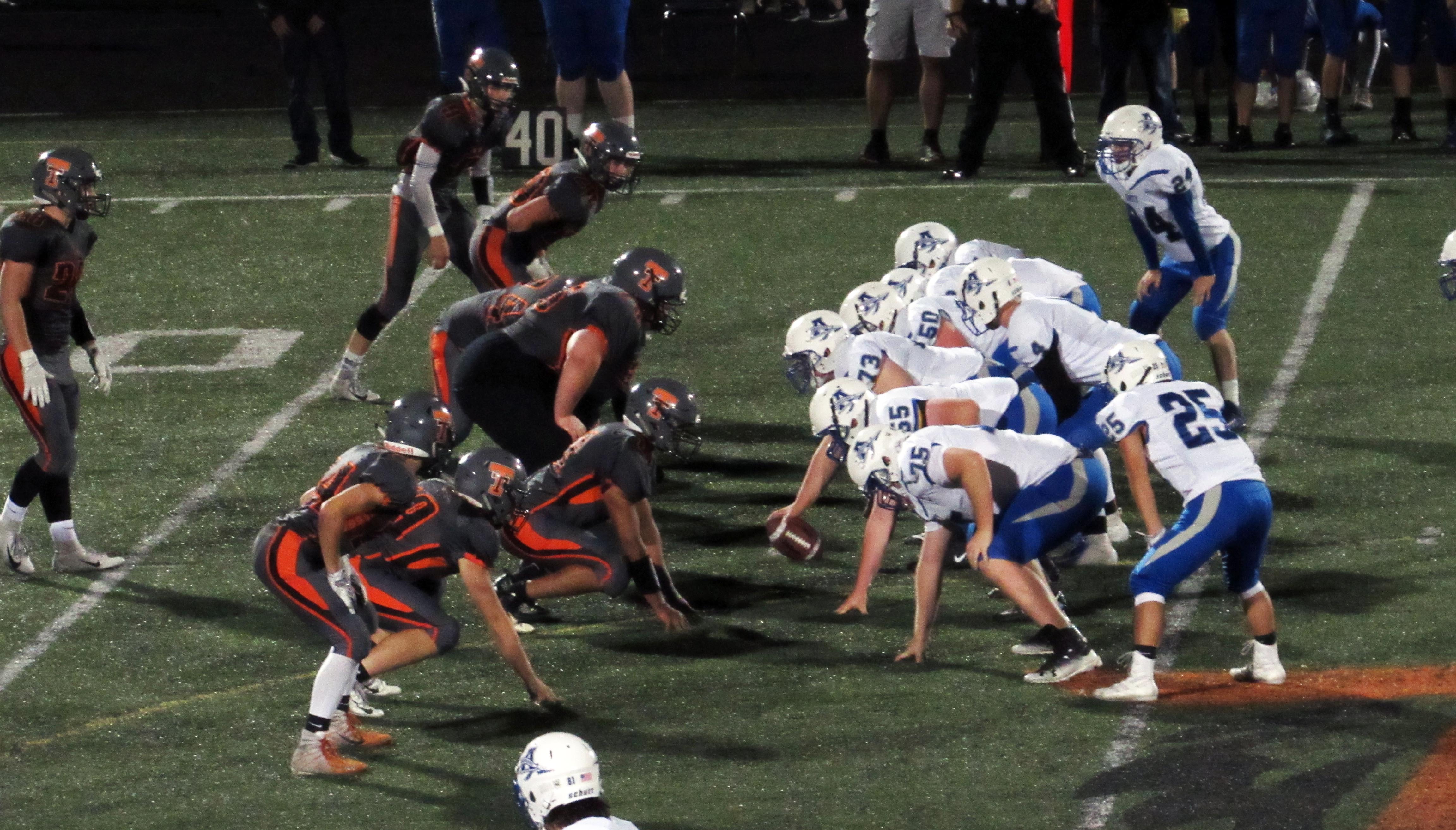