Take extra caution when finding your way in winter travels 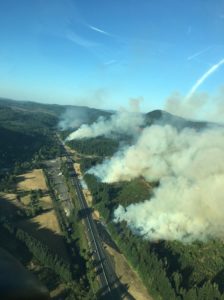 While the peak August fire season brought 839 blazes and burned 69,600 acres of Oregon land, there was a reduction in human-caused fires in comparison to the 10-year average.

“This is very encouraging,” Oregon Department of Forestry (ODF) Fire Prevention Coordinator Tom Fields said. “I’d like to think that people are starting to get it.”

On the nearly 16 million acres of lands protected by the ODF alone, acres affected by wildfires on all jurisdictions in Oregon represent more than 748,000 acres to date in 2018.

“Oregon is a beautiful place to live, but it does come with the risk of fire, especially from May through October,” Fields said. “We are hopeful that the trend continues and that we can end 2018 on a high note. But we still have a long way to go.”

While more than 44,000 acres burned on ODF protected lands have been attributed to fires started by lightning (210), the number of human-caused fires represents 75 percent of all ignitions.

The leading culprits behind a number of these fires are those burning illegally (99), drivers of poorly maintained vehicles (57), and campers failing to properly extinguish campfires (37). Other causes include power lines, mowing dry grass, fireworks and smoking. Nearly 60 wildfires are still under investigation.

Fields says that the end of fire season generally lasts through October, when several days of significant rainfall saturates the landscape. Each ODF protection district makes that determination based on conditions in their respective areas.

For now, fire restrictions remain in place and the public is encouraged to keep up the good work, Fields said.

Visit ODF for the latest on fire restrictions in your area.