Four weeks into the 2019 golf season, the young Tigers have competed in three non-qualifying nine-hole, stroke-play matches. Comprised of a single senior, along with one junior and four freshmen, Taft is considered a rebuilding program. The coaching staff expects this young team to compete for a district title — with some room to grow along the way.

As for the first District qualifying tournament, the Tiger staff elected to bring two golfers. Senior William Brooks and freshman Zac Wil represented Taft at Creekside. As for the remaining Tigers, they remained at their home course, Salishan, for another day of improvement — with their swing instructor, assistant coach Dean Konecny.

Freshmen Ethan Unruh, Eston Whistler and Julian Baca, and junior Jonathan Freilinger, are managing their swings, and course discipline prior to a nine-hole invitational in Waldport on Wednesday. The following Wednesday, April 10, Taft will host the district teams at Salishan.

The April 10 tournament will be the Tigers’ first 18-hole competition. Hopefully, after proving themselves at home, Taft will travel together for the remainder of the year. Best case scenario, the Tigers will compete, using the five best scorers from each Friday qualifying practice round, to play each of the remaining tournaments.

We are trying to build a strong, confident group of competitors prior to testing our team against more senior teams in our district. Since we have such a young team, we are building for the future while attempting to be competitive this year — leading up to the District championships at Trysting Tree in Corvallis.

Brooks is expected to be our team leader, both on the course, and in preparing the younger Tigers. Taft’s lone senior has been focused on some mechanical changes and staying focused on his goals as a top competitor in our district — which is led by Tommy Rohde of La Pine.

As a four-year competitor, William has earned the right to lead this team. He has accepted the responsibility to show the youth, particularly Zac, how to enjoy the competition. Zac may be a more calculated competitor, as he is learning the ropes, while William takes everything in stride — as an upperclassman is to be expected to do. The chemistry has been great.

In today’s match, William and Zac carded some good scores and struggled a bit as well.

William was in the first group, as the better experienced scorers usually are — in the early matches. This tends to keep the accelerated pace of play, as is the focus in modern golf. Utilizing new rules, such as the drop from the knee, and leaving the stick in the cup, the front nine was completed in just a few minutes over the two-hour mark. This is an improvement from prior tournaments.

Brooks carded a 48 on the front nine, and Wil followed with a 52. These are decent scores for these two, as they navigate a long and tricky course on a wet and dreary day. Wil finished the first half with a par 4 on the ninth hole, following Brooks’ 5.

The first two holes were tough on the Tigers, as Brooks lost a ball on the first hole, and Wil on the second. The teammates improved on No. 3, as Wil bested Brooks’ par — with a birdie 2 on the short par-3.

The rain increased as the front teams made the turn to the back nine. Wil struggled with his fairway irons, and Brooks fought his normally trustworthy putter. Both teammates lost balls on the way in, and both balanced their struggles with some fantastic shots.

Brooks finished with a 47, added to his 48 out, totaling a respectable 95. Wil struggled more on the back, as is typical with younger golfers, adding 57 in to his 54 out — carding a total score in his first varsity match of 111.

While both golfers are quite capable of better scores, it was a respectable first outing. The two discussed their game during the ride home and their spirits are high. Both are looking forward to adding their teammates to provide scores toward qualifying for the State tournament at Emerald Valley, home of the Oregon Ducks. 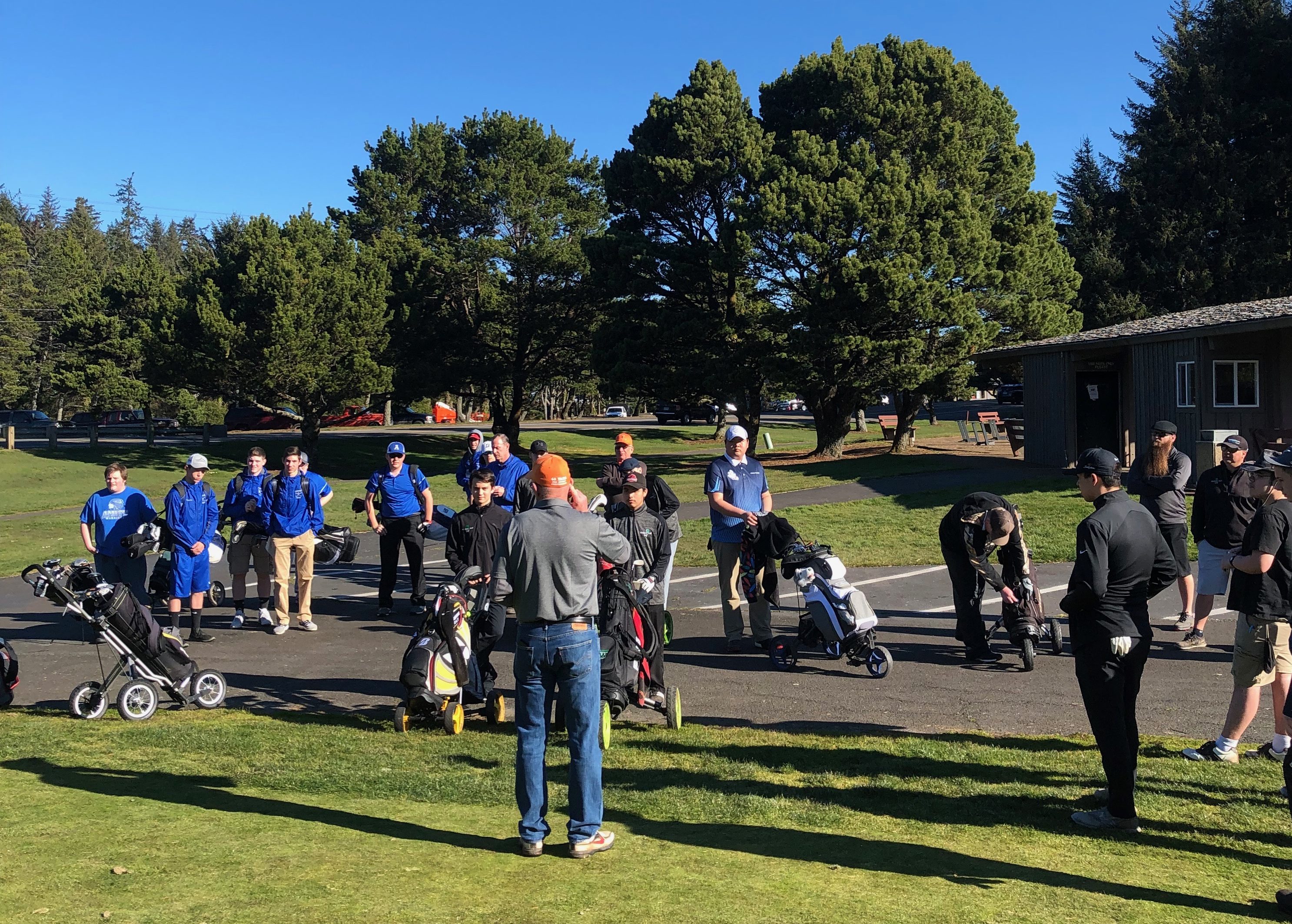