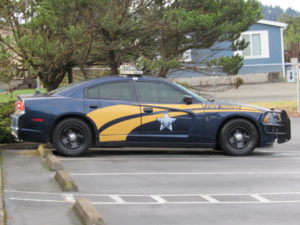 On March 21 at approximately 9:37 a.m., the Oregon State Police received a report of a white Jeep partially submerged in the Siletz River near milepost 6 on SR 229. The vehicle was reported by passersby and it was unknown if the vehicle was occupied. OSP responded along with North Lincoln Fire and Rescue’s water rescue team. The vehicle was resting on its driver side along the eastern riverbank and initial searches appeared that the vehicle was unoccupied. Tracks at the scene indicated at least one person had climbed up the riverbank near the vehicle. Members of North Lincoln Fire and the Lincoln County Sheriff’s Office Marine Deputies assisted with a search of the river but no one was found. The vehicle was towed from the river by Car Care Tow Pro of Lincoln City and was confirmed to be unoccupied. The two occupants of the vehicle were later located and were safe. Investigation showed that the vehicle had parked along the western shoulder of SR229 around 11 p.m. on March 20. The operator parked on the earthen shoulder too close to the edge of the embankment. The front passenger side tire area began to give way a short time after parking and when the operator attempted to pull out, the passenger side of the vehicle slid down the embankment and the vehicle rolled approximately 60 feet down the embankment into the water.