“Spooky Spectacular” was a welcome respite from the Halloween rain Wednesday for a record number of trick-or-treaters.

Parked cars lined High School Drive on both sides as far as Oregon Coast Community College. Scores of families ran through the pouring rain to the Taft Elementary School entrance.

The carnival held in the gym was filled with costumed kids playing games and featured two bouncy houses. Local church pastor Mich Conte and his wife Ashlee, with the help of many volunteers including the North Lincoln Ministerial Association, ran the games and provided donations with their network.

Patrons walked the length of the school with stops at classrooms to trick-or-treat for candy, toothbrushes, floss and pencils. 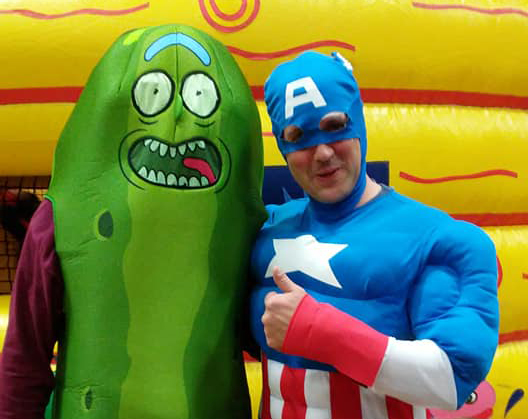 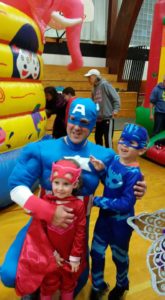 The event was started more than a decade ago by the Bay Area Merchants Association (BAMA) and Kip Ward, then-owner of The Eventuary and Historic Anchor Inn. It was called “Haunted Hotel” before changing its name to  “Spooky Spectacular” when it outgrew the hotel venue.

Ward and fellow BAMA members collected candy year-round about town, held a free barbecue with donations benefiting pets in need (now the Beach Bark), and children and families would trick-or-treat. 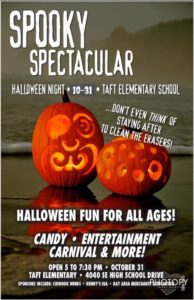 Today, the event, which features many of the same attractions, operates entirely off community donations and volunteers, Tolan said.

“We do not use school district funds, and any person working it is completely on volunteer time,” she said.

Kenny’s IGA let participants collect donations at its storefront, and local pastor Conte, his wife Ashlee and many volunteers supplied the carnival, adding bouncy houses for the first time this year. Dignitaries such as Mayor Williams have volunteered for years.

“It is really an amazing and safe event for Lincoln City to be proud of,” Tolan said. “This year, we hardly even advertised because it has just become ‘what we do.’ It really is a beautiful thing to watch so many people have fun together because of the work of so many.”

Paedomorphic salamanders have taken up residence inside Taft Elementary thanks to a future Navy Seal's Eagle Scout project.
Read more

Half of Lincoln City turned out for Spooky Spectacular at the Lincoln City Outlets Monday night, getting candy and compliments on their rain spattered costumes.
Read more

A sweet deal for kids

Like some weird dream, dinosaurs roamed alongside fire fighters, clowns and even a spaceship at the Faith Baptist Church annual "Trunk or Treat" gathering Saturday night.
Read more

Lincoln City Homepage is looking for the community's spookiest images of Jack-O'-Lanterns, costumes and pets for a chance to win a portion of $100 in gift certificates to Lil' Sambos Restaurant.
Read more

Many people view Halloween as a time for fun and treats. However, in the United States, roughly two times as many children aged 5-14 are killed while walking on Halloween evening compared with other evenings of the year.
Read more

All students were evacuated but all are safe after workers with the Lincoln County School District inadvertently struck a one-inch gas pipe with a backhoe while rerouting a sewer line at Taft Elementary School today.
Read more