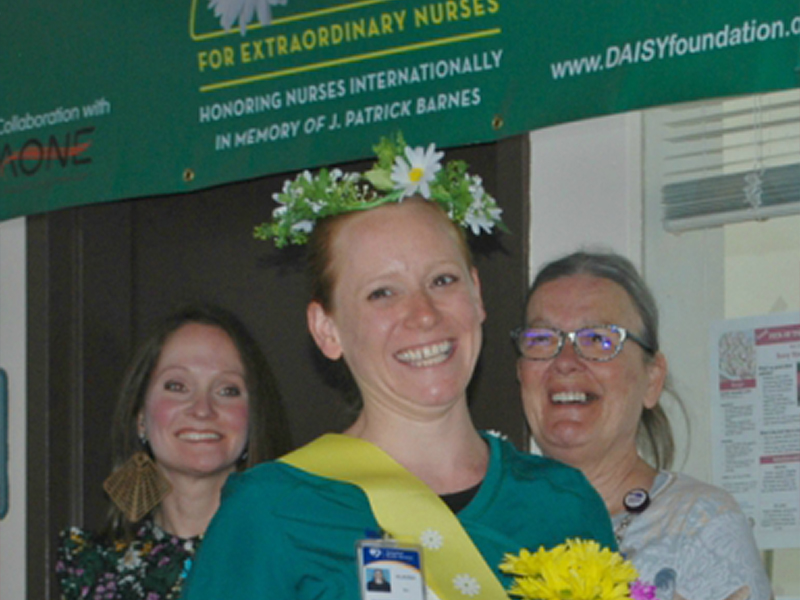 Always providing tender care to each patient – for this reason and others, Elaina Wilson, RN, was selected as the 2019 DAISY Award recipient during a ceremony at Samaritan North Lincoln Hospital (SNLH) on Tuesday, May 7.

Wilson has worked in the hospital’s medical/surgical inpatient unit for almost five years. She was one of 12 nurses nominated and who met specific criteria for this first-time awards program at SNLH.

Upon presenting the award, Kathy Skipper, vice president of Patient Care Services, commented: “Without exception, when a nurse receives the DAISY Award, the humble response is, ‘I didn’t do anything special. I was just doing my job.’ What they may not realize, however, is that when nurses are ‘just doing their jobs,’ they have such an important and meaningful impact on the lives of so many people. They are making a positive difference in the lives of patients and their families. You are making the world a better place because you are a nurse. We salute you and honor you.”

The nomination submitted by one of Wilson’s colleagues stated, in part:

“I have observed Elaina as she has cared for many types of patients. She is always kind, gentle and compassionate but two events in particular stand out for me. She was the primary nurse for a patient who was actively dying. I remember how gentle and compassionate she was, but I remember most the tears I saw in her eyes as she was caring for a person whose life was ending. She cared so much for someone who had been a stranger and was now her patient.”

The nomination continued, noting the care that Wilson provided to the colleague’s father during his hospitalization.

“He was sometimes irascible, reluctant to follow the program and had great difficulty hearing, yet she was always pleasant to him and to all of our family, and demonstrated the same compassion for a relative stranger time and time again,” the colleague wrote.

The DAISY Foundation was established by the family of J. Patrick Barnes, who deeply appreciated the care and compassion shown by his nurses before his death. To learn more, visit daisyfoundation.org or send an email to [email protected].

The first baby born in 2023 at a Samaritan Health Services hospital arrived in Lincoln City at 12:58 a.m. on Sunday, Jan. 1, followed a few hours later by the first baby of the year in Newport.
Read more