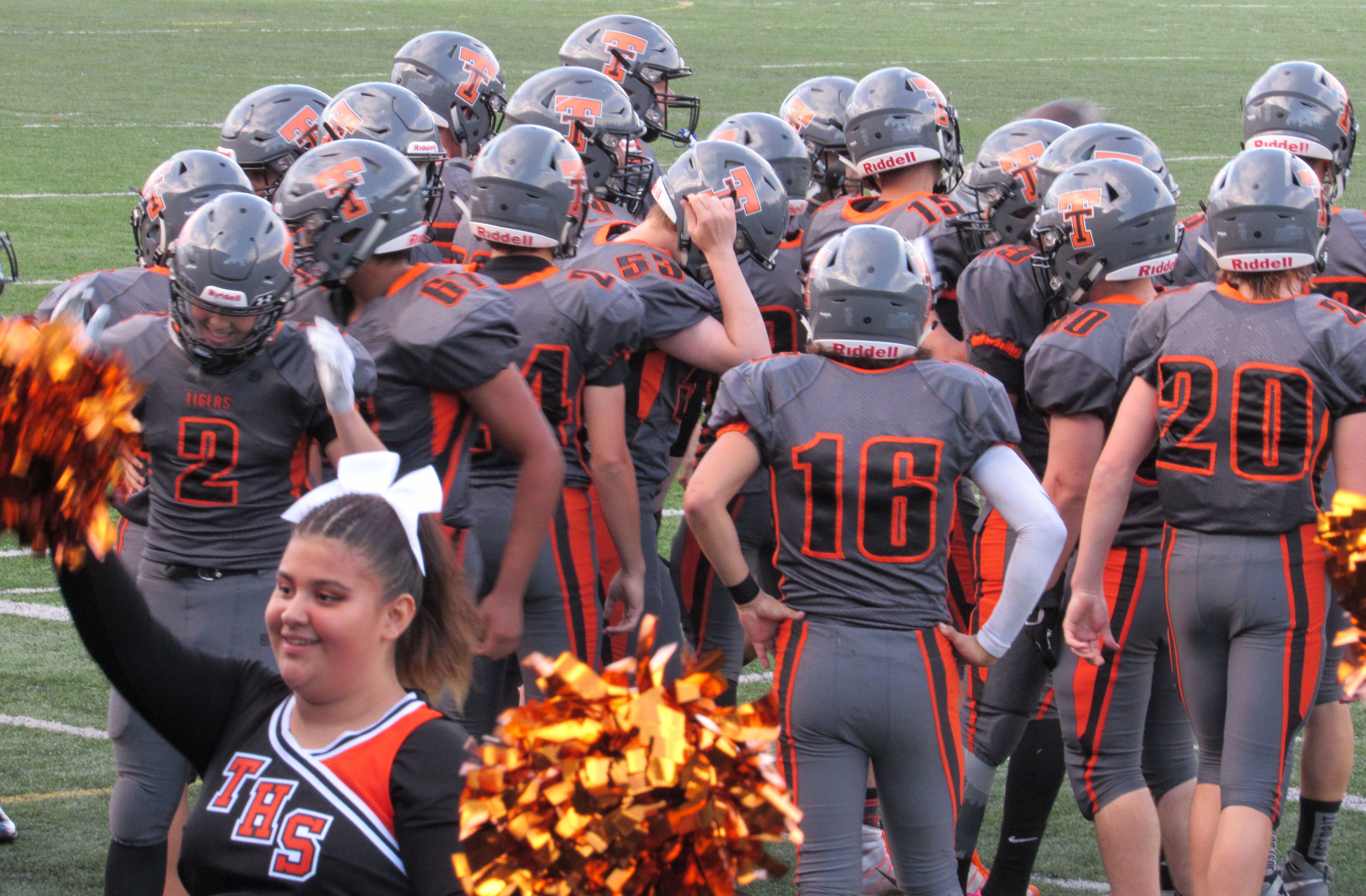 Taft junior running back Logan Gilleo scored on a 1-yard throw from Jin early in the second quarter, and senior receiver Tyee Fisher caught a 5-yard pass ruled in bounds just 13 seconds before intermission to make it 14-13 after senior place-kicker DeVon Lindquist converted his second point-after attempt of the game.

The Bulldogs scored first on an 18-yard first-quarter run by senior running back Bryce Anderson, and moved on top 13-7 following Gilleo’s score when junior running back Jake Merrifield went 36 yards 8:44 before halftime.

The victory evened Taft’s record at 1-1 following a 60-29 season-opening loss at Class 3A power Harrisburg last week. Sutherlin, which opened with a 16-13 victory at Class 4A Hidden Valley, dropped to 1-1 in the non-league game.

“It was a big win for us as a team and our defense. I’m so proud of my guys. They fought and battled all night and never wavered in their mindsets.

“Sutherlin was a big and physical team, the type of team that traditionally runs all over us. But this week those were two main focuses; conditioning and improving our intelligence defensively.

“Offensively, we had some big plays in the first half, and then managed the game with a lead in the second half and relied on our defense to keep us ahead.

“We will need this type of defensive effort every week as our schedule only gets more difficult as we go on the road next week and play a very good 2A opponent in Knappa.

“We are getting better, which is all I ask. We will continue making our conditioning and execution on both offense and defense the main focuses going forward this week.”

The game opened with a turnover on the opening kick, which Taft recovered at the Sutherlin 26. After the Tigers turned the ball over on downs, Sutherlin senior running back Hunter Fadness gained a first down inside his own territory and senior quarterback Cade Meisner kept the drive going by gaining a first down on a quarterback sneak on fourth down.

Under heavy pressure, Meisner broke free on a run from the backside for another first down to the Taft 34. After Meisner ran 12 yards to the Tigers 18, senior running back Bryce Anderson busted into the end zone on the next play to culminate a 75-yard scoring drive and give the Bulldogs a 7 -0 lead inside of five minutes. 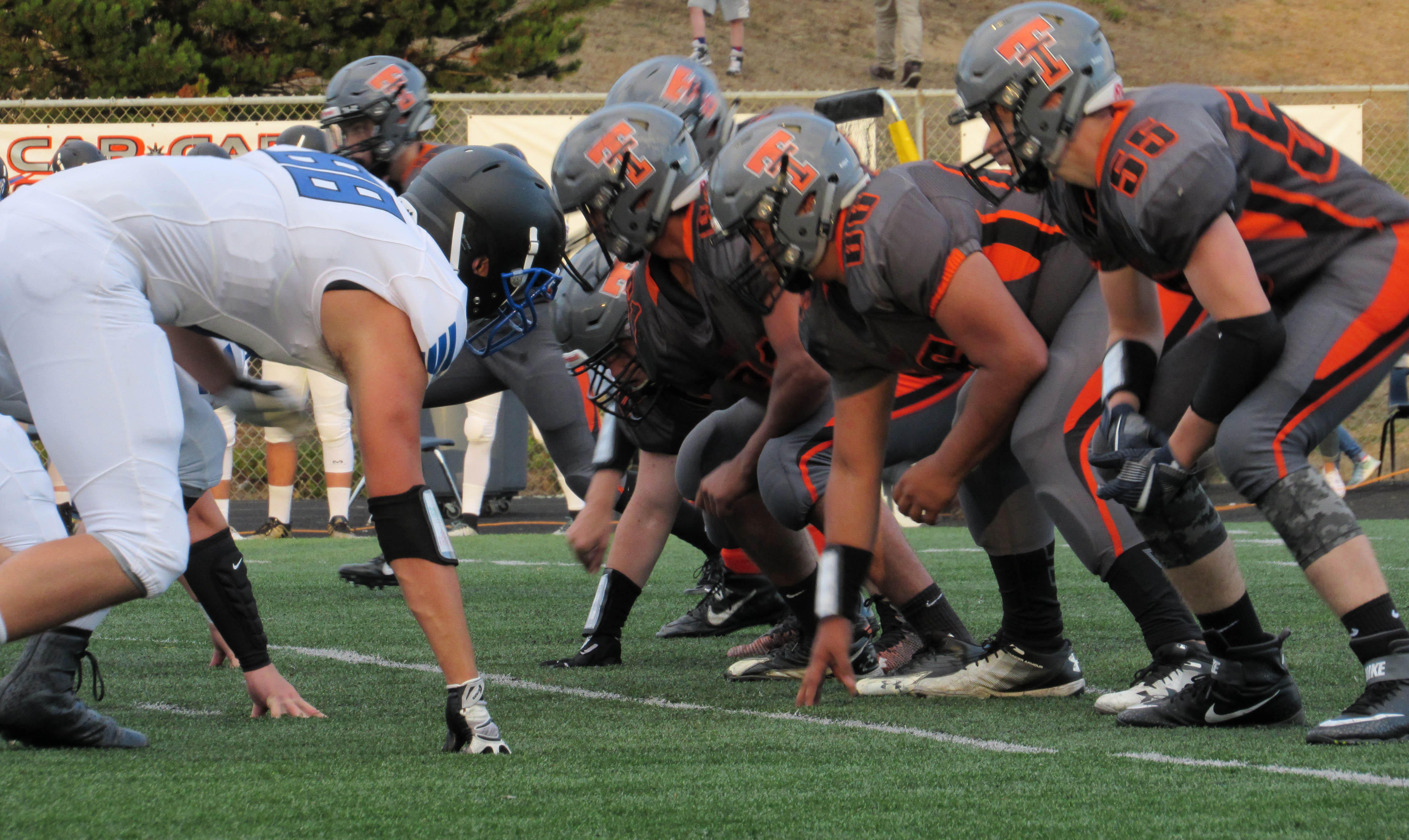 Taft sophomore receiver JJ French took the ensuing kickoff 33 yards into Sutherlin territory. The Tigers’ spread offense, behind senior quarterback David Jin, then moved to the Bulldogs 23 on a reception by senior Kam Kessler. Jin ran up the middle for a first down for a first-and-goal at the 7. A pass interference call in the end zone gave Taft a first down before the first-quarter clock expired with the Tigers facing third-and-goal at the 3. 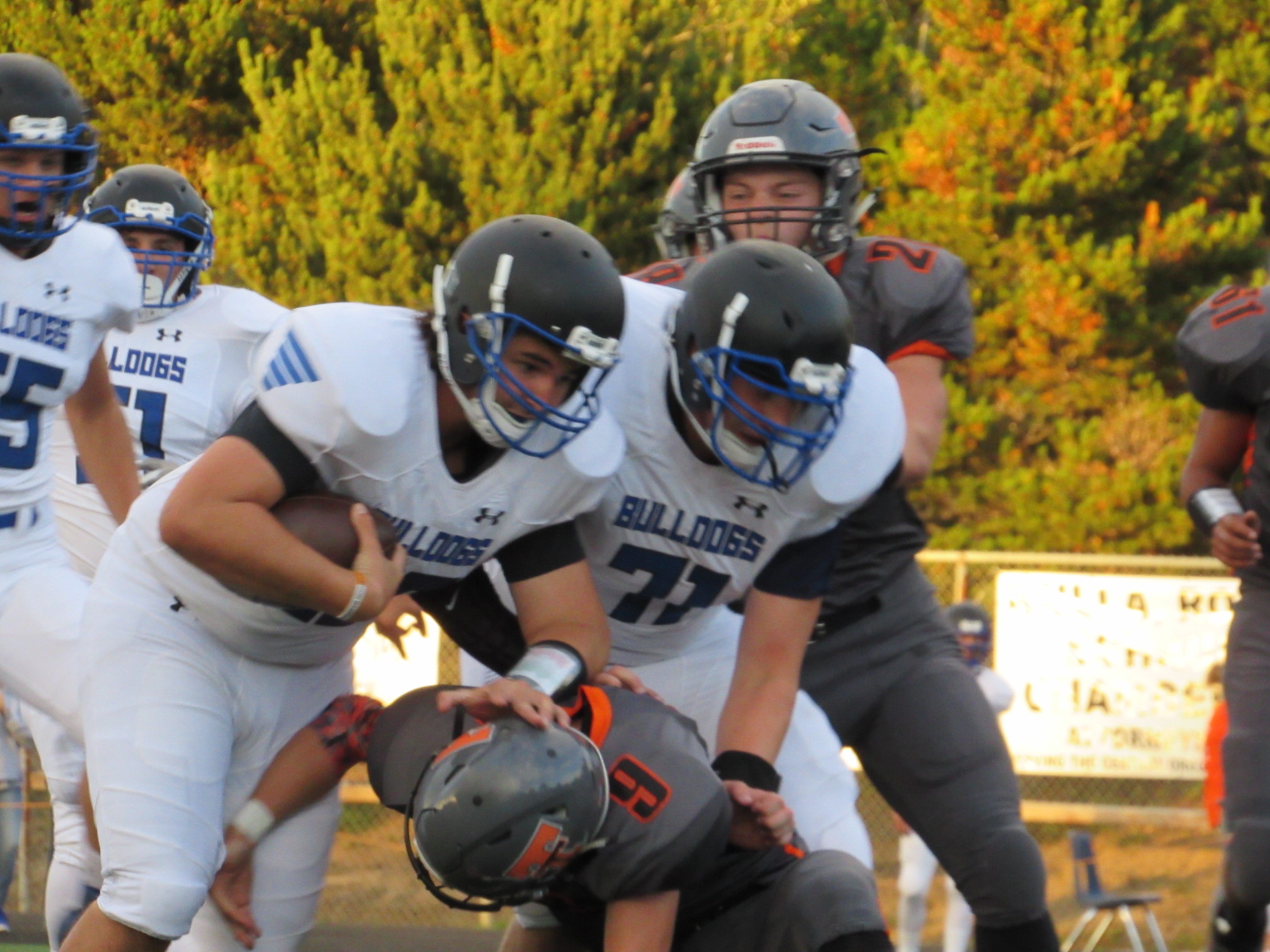 After Taft was penalized 10 yards on the kick, junior running back Jake Merrifield busted one 36 yards up the middle into the end zone for a 13-7 lead following a missed PAT 8:44 before halftime.

The Tigers started the ensuing drive at their own 34 before Jin gained a first down near midfield. After a Taft timeout, the Tigers, facing fourth-and-1, gained a first down as French gained two yards on a pass from Jin, Taft’s second first down on four fourth-down conversion attempts. Taft committed its first turnover of the game on the next play on an interception by Sutherlin junior defensive back Mason Gill on a pass from Jin intended for Taft senior wideout Tyee Fisher.

Meisner was sacked for a loss of 12 yards by Taft junior linebacker Trenton Hall, the Tigers’ first sack of the season. Sophomore defensive back Darius Smith then intercepted Meisner in Sutherlin territory inside of two minutes before Gilleo ran 32 yards on a screen pass from to Jin to the Sutherlin 35-yard line 1:39 before halftime.

A sack cost Taft 13 yards on the next play to make it third-and-long before senior receiver Logan McLendon took a screen from Jin down the sideline to the 20 with less than 30 seconds to play in the half. Taft moved to the 1, where Sutherlin was called for roughing the passer on an incomplete pass in the end zone. Jin then hit Fisher for a 5-yard score that Sutherlin coaches argued was caught out of bounds to make it 14-13 Taft on Lindquist’s point-after kick with 13.2 seconds to play before halftime. 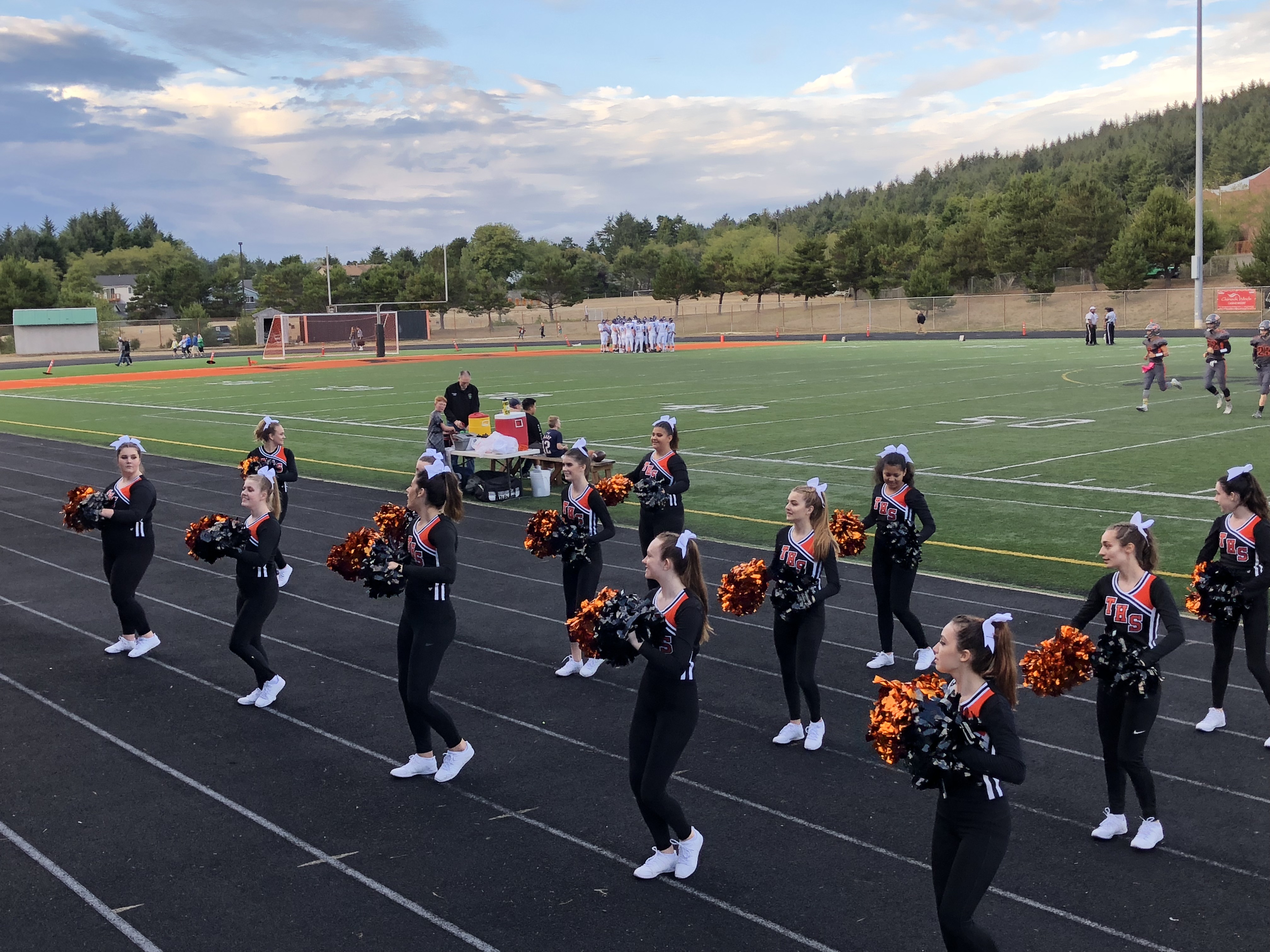 Taft tried to convert on fourth down for the fifth time in the game on its first possession of the second half and managed a first down on an offsides penalty at the Sutherlin 37. Jin was then intercepted by Bulldogs senior outside linebacker Will Singleton on a screen, but the Tigers got the ball right back on the next play on a fumble recovery by sophomore linebacker Brendan Welch.

After Jin pulled Sutherlin offside on a hard count for the third time in the game for a first down at the Bulldog 28, Taft moved to the Sutherlin 15 on a catch by Kessler for his second first-down grab of the game. After a trick play on third down on a pass from Kessler, the Tigers turned the ball over to the Bulldogs on downs deep in their own territory.

The Bulldogs, operating from the Wing T, moved downfield into Taft territory on several sizable gains to inside the Tigers 20. Taft forced Sutherlin into a fourth-and-7 at the 20 before the Bulldogs eschewed a field goal attempt and committed a false start to make it fourth-and-12 at the 25. Meisner overthrew Gill to give the ball back to Taft in its own territory as the third quarter clock worked inside of three minutes.

Taft failed to move the ball for either team’s first three-and-out and Fisher sent the game’s first punt to the Sutherlin 44-yard line as the clock expired with the Bulldogs near midfield. 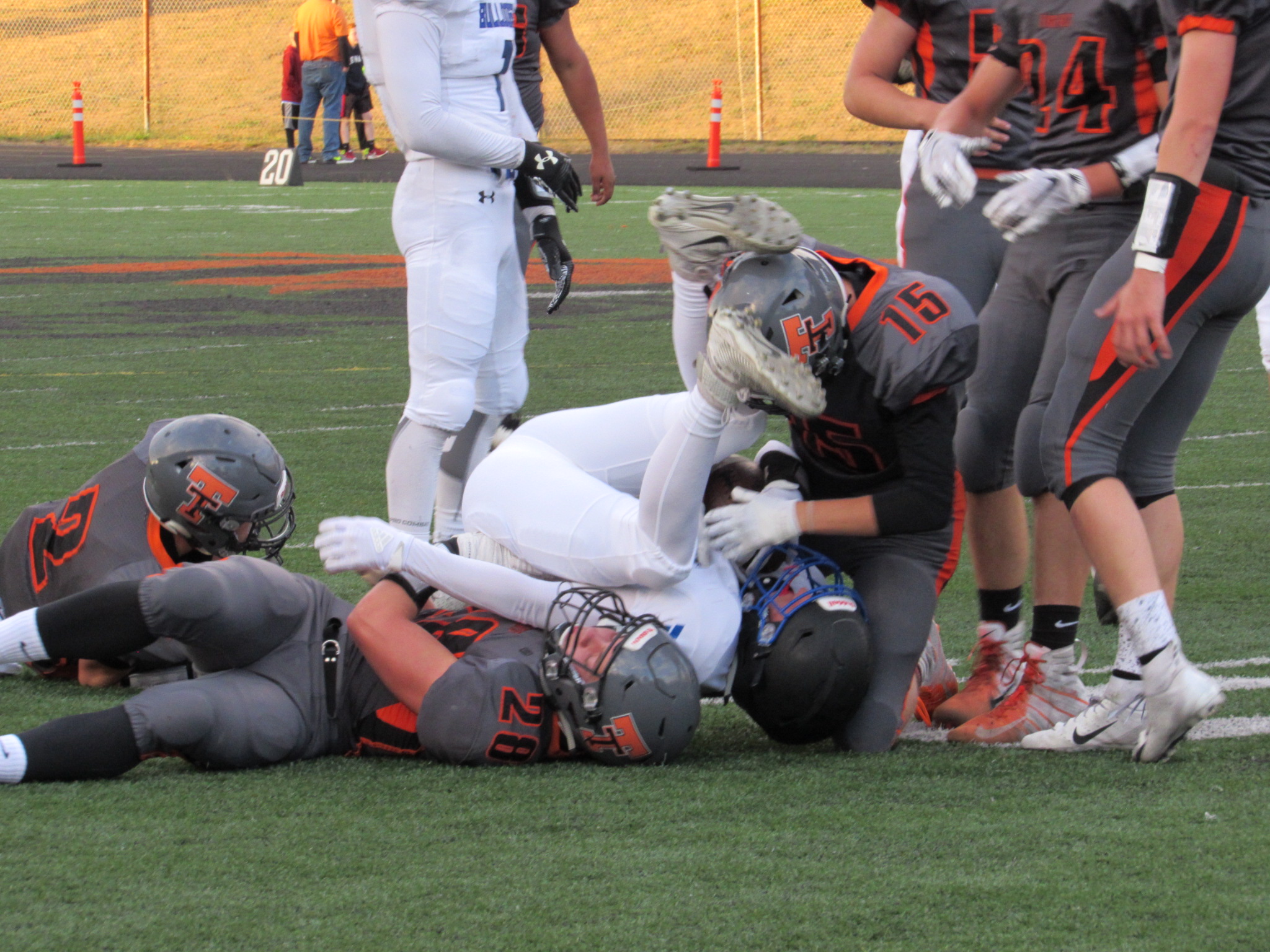 Taft’s first penalty of the second half gave the Bulldogs a first down before the Tigers recovered a fumble by Merrifield at their own 25 for Sutherlin’s fifth turnover, and fourth lost fumble, of the game with 10:23 remaining. Kessler then hauled in a pass from Jin for 20 yards for a first down near midfield. Unable to advance the ball from there, Fisher punted into the end zone to give Sutherlin possession deep in its own territory with nine minutes to play.

Taft brought Meisner to the turf short of a first down on a third-down play to make it fourth-and-2 when junior defensive lineman Tyrese Hellman met the Sutherlin quarterback in the backfield to force a turnover on downs with three minutes to play.

Taft managed to trim the game clock to 2:22 after Jin threw incomplete to Kessler on fourth-and-10 at the Sutherlin 34. The Bulldogs then connected on a 32-yard catch from Meisner to senior tight end JR Bailey to the Taft 38 before a penalty brought the ball back to the 48 inside of two minutes. Meisner then threw incomplete to bring up fourth down with 1:35 remaining. Meisner’s desperation fourth-down pass fell incomplete to surrender possession to the Tigers with 1:30 to play.

Taft then assumed the victory formation as Jin took a knee to run out the clock and finish off a scoreless second half.