The most recent data suggests that current social distancing measures could cut transmission rates between 50-70 percent if Oregonians maintain limitations on virus-spreading interactions into early May.
Read more
Local News

Unacast, a data company that provides cellphone location data and analysis, recently revealed a product called the Social Distancing Scoreboard. The scoreboard provides letter grades for every county and state in America based on how residents are practicing social distancing.
Read more
Local News

Column: It’s a small world after all

In my community college course we discuss how Earth’s population growth can impact our environment and increase disasters.
Read more
Local News

Lincoln County call center answers any and all questions

Lil Sambo's has been a coastal landmark since the 50s and recently closed along with myriad other restaurants due to COVID-19, but restaurateur Cary Moore has built a drive-up window to bring pancakes and bacon to the sheltered masses.
Read more 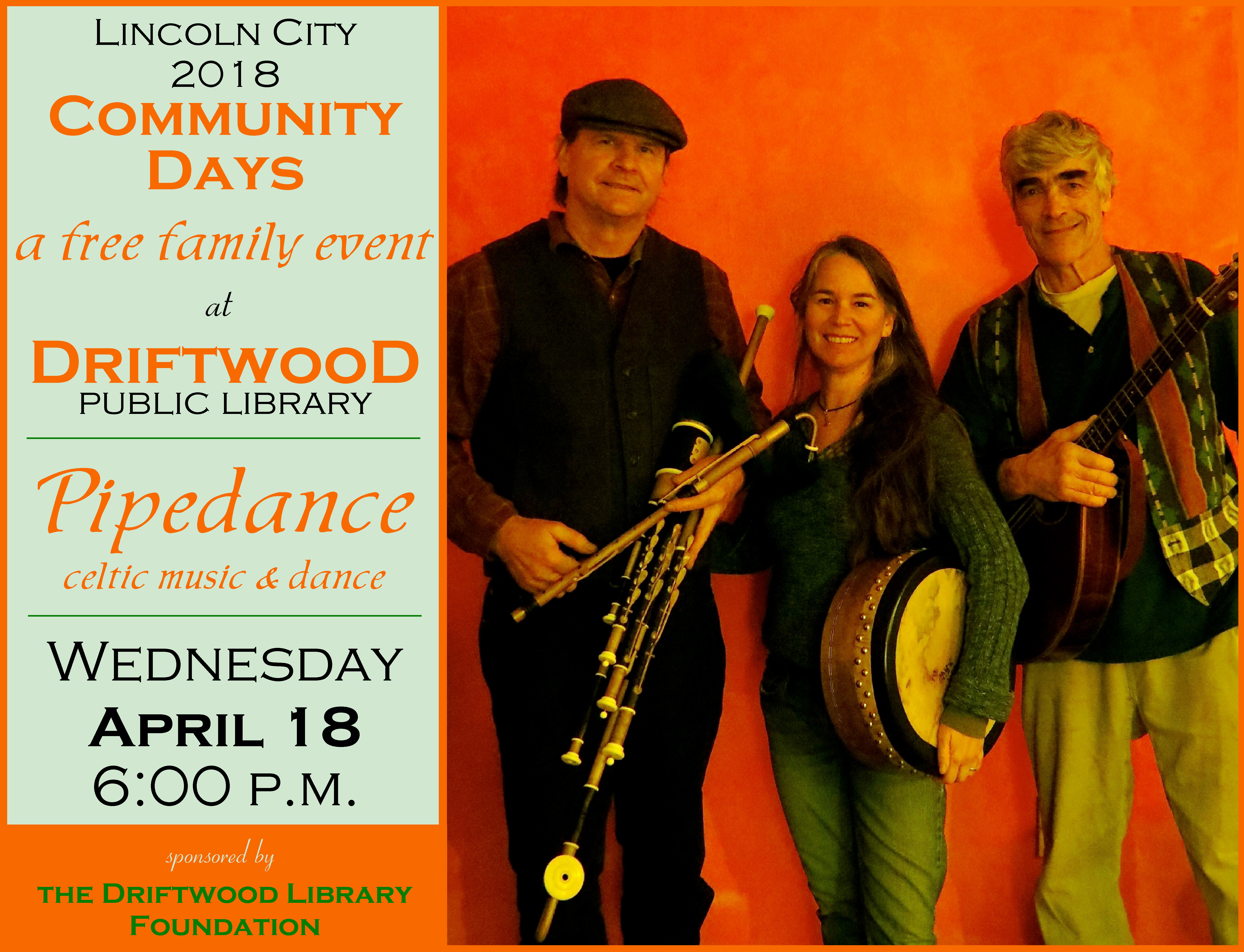 Lincoln City, OR – Driftwood Public Library will celebrate Community Days this year with a performance from local band Pipedance. The family program will begin at 6:00 p.m. on Wednesday, April 18th and all ages are invited to come listen, dance and enjoy the band’s Celtic sounds.

Pipedance was formed out of a true love for Irish music and dance. The now Lincoln City, OR-based husband and wife team of Gary Burman and Nora Sherwood began to perform together in 2001. The duo’s traditional sound is complemented by Nora’s percussive sean nós dancing – this duo is not only fun to list to, they are fun to watch.

Gary Burman is a lifelong musician who plays uilleann pipes, guitar, flute and whistle, among many other instruments, and is also a balladeer. He is a craftsman who builds his own pipes and will be playing instruments he built himself.

Nora Sherwood is a retired champion Irish step dancer who ran an Irish dance school in Colorado before moving to Oregon. She plays whistle and bodhrán, and sings and dances in the traditional sean nós style. She was named Folk Musician of the Year at the Long’s Peak Scottish/Irish Festival in 2008 for her sean nós singing.

Driftwood will also be announcing its 2018 Lincoln City Reads title at this program.

This concert is sponsored by the Driftwood Library Foundation and is free to all who wish to attend. Questions about the program may be directed to Ken Hobson at Driftwood Public Library: 541-996-1242 or [email protected]. Driftwood Public Library is located at 801 SW HWY 101 in Lincoln City on the 2nd floor of the City Hall building, across the street from Burger King and adjacent to McKay’s Market.

Justin Wernerhttps://wernerhost.com/
Justin Werner is founder and publisher of Lincoln City Homepage and a journalist reporting news for the fine citizens of Lincoln City, Oregon and beyond. He's on a mission to seek out truth and isn't afraid to be the tip of the spear for freedom of the press. When he's not wearing his reporter hat, you can find him enjoying the Oregon Coast with his wife and three children.
Previous articleIntroducing the Lincoln City Homepage-Mini
Next articleBirth to 5 – Ready, Set, Thrive!

Driftwood Public Library's summer reading program for families: "A Universe of Stories," is designed to entice youngsters to read, and the rewards are out of this world.
Read more