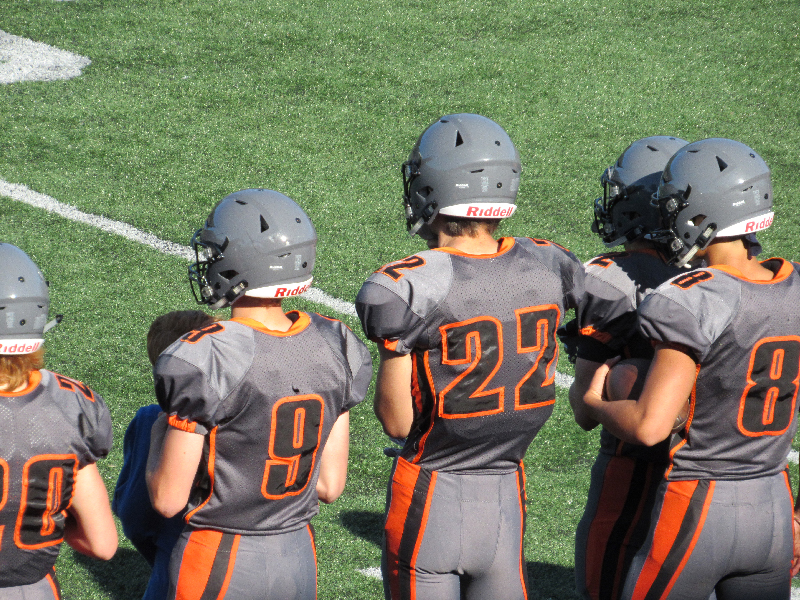 Just two years removed from winning the Class 3 State championship, the Eagles got four first-half touchdowns from senior quarterback Lettkeman and two from junior running back Knox to race to a 35-7 halftime lead.

Harrisburg moved into Taft territory from its own 23-yard-line after the game’s opening kick with a 38-yard gain on a screen pass before Knox bolted to the Taft 3. Knox scored on the next play to culminate a 77-yard drive, and the Eagles added a two-point conversion run for an 8-0 lead.

Taft junior running back Logan Gilleo returned the ensuing kick to the Harrisburg 26-yard line before Jin broke loose on third down for a first down at the Eagles 15 before the Tigers came up just short of a first down on fourth-and-4 pass from Jin to Fisher.

Taft held the Eagles on the ensuing drive and regained possession following a punt at the Harrisburg 43. A low snap following a big-gainer lost 15 yards to the Eagles 39 and forced a Taft punt to the 12-yard line.

After forcing the Eagles to a three-and-out, Taft gained possession in good field position and Jin hit Ramos for a sizable gain before a holding penalty brought the ball back to the 38 on the subsequent down. Taft then turned the ball over on fourth-and-long.

The Eagles, behind Knox and Lettkeman, moved downfield on a series of inside runs before Lettkeman burst across from the 3 for a 14-0 lead early in the quarter. A two-point conversion pass attempt failed.

Taft, starting in Harrisburg territory following a short kick, punted for the second time after gaining a first down, before Knox burst into the opening and went 23 yards for a score. Lettkeman’s two-point conversion run made it 22-0 midway through the period.

Taft failed to convert after a fourth-down tackle behind the line of scrimmage on the ensuing possession, giving Harrisburg the ball at the Tigers 43 with 5:54 to play in the half. The Eagles’ spread offense took advantage before Lettkeman took a broken play 8 yards into the end zone for a 28-0 lead following a failed conversion attempt with 4:48 to play.

Taft’s offense stalled and surrendered possession on the next series before the Eagles’ play-action opened up the middle and allowed Lettkeman to bolt 22 yards up the middle for a 35-0 lead after the PAT.

Taft moved downfield as the first-half clock wound down and advanced the ball to the 5-yard line on a 17-yard run by Jin 18 seconds before the half. Jin then hit Ramos for a touchdown from the 5 to make it 35-7 at halftime.

Taft used another long kickoff return to establish good field position to open the half before Fisher was forced to punt the ball away to the Harrisburg 11-yard line. The Tigers then recovered a fumbled snap at the Eagles 15 for the game’s first turnover, and managed a first down following a pass interference penalty in the end zone. Jin then hooked up with Ramos from 14 yards out for their second touchdown connection to make it 35-13 just inside the 10-minute mark of the quarter.

Knox continued his bruising counter running on the game’s next possession to march the Eagles downfield in response to Taft’s two unanswered scores. Attention on Knox allowed Lettkeman to bust free from the 10-yard line for his fourth TD and a 42-13 lead at 7:07 of the quarter.

After Taft turned the ball over on downs, Knox pounded the ball inside the 10, where sophomore Chandler Strauss scored on his first carry of the game to make it 48-13 after a failed conversion try with 3:58 to play.

Harrisburg senior defensive back Riley Suttles then recovered a Taft fumble to set the Eagles up at their own 47. After Lettkeman completed just his second pass of the game to the Taft 28, Strauss bolted 24 yards for a 54-13 Harrisburg lead at 1:19 of the quarter.

Pass interference and personal foul penalties against Harrisburg to open the period moved Taft 30 yards downfield before Jin hit Fisher for a 16-yard score to cut the deficit to 54-21 following a successful two-point conversion try.

French then took a swing pass from Jin for 40 yards and a touchdown on Taft’s next possession to slice the lead to 54-29 following the two-point point-after try.

Lettkeman finalized the scoring with his fifth TD that made it 60-29 with 5:24 to play.

This post was updated live immediately after every quarter