The Battle for Nelscott Reef Continues

Lincoln City, Oregon – Monday’s City Council meeting was a great opportunity to show the council just how dangerous the Nelscott Reef Big Wave Pro-Am’s “10 Barrel Warm Up Session” event was. Lincoln City Homepage reporter, Justin Werner, spoke at the council meeting explaining the dangers of not having safety as it concerns the city on city property. The conditions on November 29th were extremely dangerous and there was no safety team on site to speak of that day.

Social media posts and a confidentially submitted Facebook Message shows the Nelscott Reef Big Wave Pro-Am staging their event from Canyon Lake City Park in a dangerous environment with no safety precautions. This would not be a big deal if the Pro-Am event organizers had secured the proper permits to use the city park and carry the proper insurance but the event organizers were told by Ed Dreistadt of the Lincoln City Visitors Convention bureau that they did not need a permit. John Forse, who organizes the Nelscott Reef Big Wave Classic event, has been securing the required permits/insurance for the last thirteen years. Mr. Driestadt has been contacted numerous times to ask him for clarification regarding his statement that permits are not required. Unfortunately, he has not responded to repeated emails and voicemail left for him. At the council meeting the City Manager, Ron Chandler, requested an email with the images so he could take a look at them. 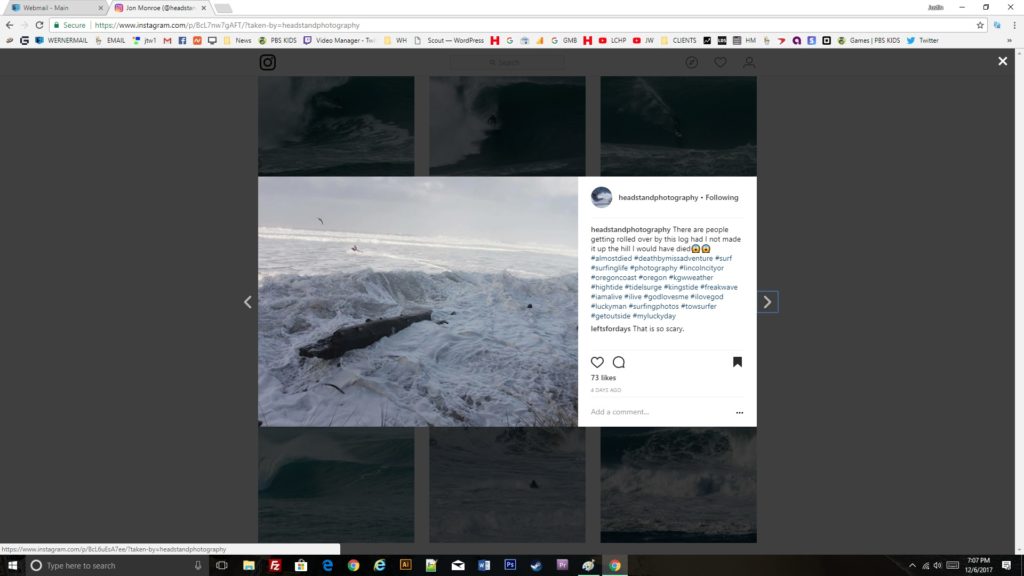 In one of the images taken from the event there are people getting pinned under a huge log. Jon Monroe with Head Stand Photography had this to say about the image:

“There are people getting rolled over by this log, had I not made it up the hill I would have died.”

John Forse with the Nelscott Reef Big Wave Classic was aware of the Pro-Am’s intention to run an event and decided to not call his contest due to safety concerns presented by the Pro-Am.

This is an email Justin Werner sent to the Lincoln City City Council, the Mayor, Police Chief Keith Kilian, Jeremy Ruark of the News Guard, and Rick Beasley of the Newport News Times, five days before this event occurred:

I need your assistance. John Forse asked me to contact you. Mr. Forse is the event organizer of the “Nelscott Reef Big Wave Classic,” which has been held annually in Nelscott since 2005. This year, Mr. Forse has secured the required event permits, OTP permits, insurance, security, parking assistants, etc. as he has done every year.

Unfortunately, three independent sources have told us that VCB Director Ed Dreistadt told the organizers of an event misleadingly called the “Nelscott Reef Big Wave Pro-Am”, that permits are not needed for their event. Since the “Pro-Am” organizers do not even have a OTP permit, as they have has never held an event here before, Mr. Forse is very concerned that if the City allows an unpermitted event to be held, it may be exposing itself to liability, as well as causing security and parking issues. This is especially true if the illicit “Pro-Am” event is held at the same time as Forse’s legitimate event.

I spoke with Police Chief Kilian and he said permits are required and need to be obtained from the City.

I have visited the VCB office several times in the last few weeks, to see Mr. Dreistadt, but he has not been available. I have also left him at least four voicemails, but I have not heard back from him yet.

To protect the City, and the event participants, from possible harm, it is vital that the “Pro Am” organizers, and Mr. Forse, are informed if event and/or OTP permits are required to hold these surfing events, so please let us know what the City’s position is regarding this.

Thank you for your assistance and your service,