‘Conversation with the Candidates’ set Oct. 17 at Autobahn 101

County assessor to reappraise areas in and around Lincoln City 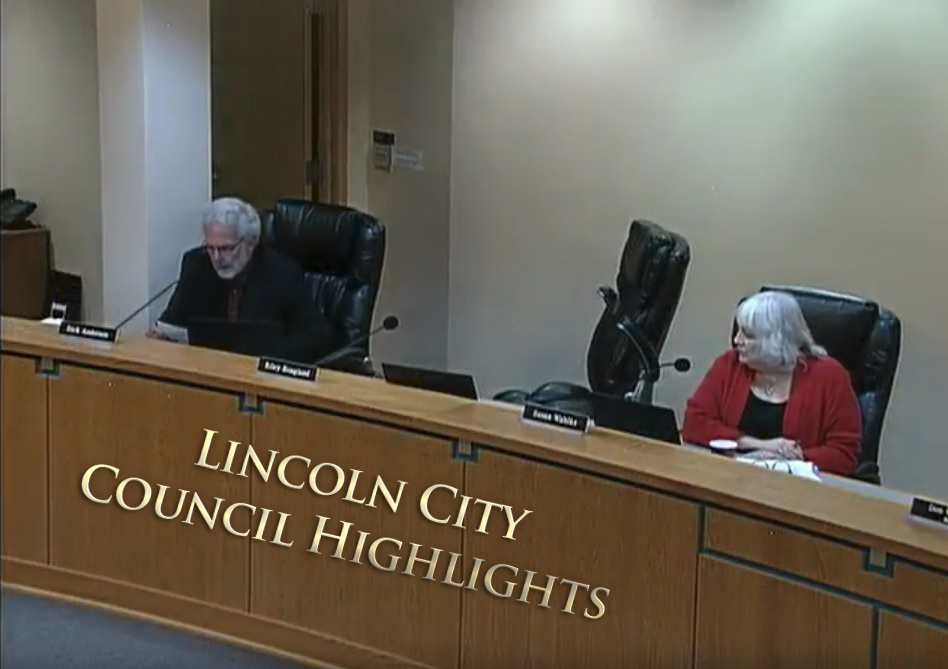 Lincoln City, OR – At the Feb. 26 council meeting, Mayor Don Williams asked for a moment of silence for the recent passing of Councilor Kip Ward. Council decided to leave vacant Ward’s seat until the November elections. Councilor Riley Hoagland expressed concern that a sex shop was too close to a proposed park. And the city council, and city attorney, apologized to Mayor Williams, as well as to the city staff, and all the citizens of Lincoln City.

Mayor Don Williams spoke of Councilor Kip Ward’s recent passing, and led the room in a moment of silence in honor of Ward. Ward passed away on Feb. 12, due to cancer. Ward’s seat on the dias was covered in flowers and candles. A celebration of life for Ward is planned for Sunday, March 11, at 2pm. at the Eventuary, 560 SW Fleet Ave, in Lincoln City.

City Manager Ron Chandler presented the proposed new park along NW Oar Place. Councilor Riley Hoagland voiced concern that the new park was only 200 feet away from a sex shop. Chandler said he would let the Parks Board know of Hoagland’s concern.

With little discussion, Councilor Dick Anderson read a statement (included below) that the City Council was apologizing to “Mayor Don Williams, Mr. [Ross] Smith, the City staff, and the citizens of Lincoln City.” While City Attorney Richard Appicello also apologized, he neglected to include the city staff, as was required of him by item 1 in the settlement agreement.

The full text of council’s apology is:

Ross Smith has filed two lawsuits against the City of Lincoln City, and our City Council in which he alleges we violated the Oregon Public Meetings Law, Oregon Public Records Law, the Lincoln City Charter and our Municipal Code at various times.

With Mr. Smith’s decision to drop the two lawsuits, it will allow us to return to the duties we were elected to do. We, the Council, wish to apologize to Mayor Don Williams, Mr. Smith, the City staff, and the citizens of Lincoln City.

Although we do not admit we violated any laws we acknowledge the lawsuits have served to remind us to carefully ensure that our public meetings, and executive sessions, are held in strict compliance with all applicable laws.

We regret the impact of disputes between the Council, Mr. Smith and the Mayor. The Mayor and Council pledge to work together to minimize disputes that distract from the important work the Mayor, Council and City staff perform for the citizens of Lincoln City.

Special election to be held for Lincoln City Mayor