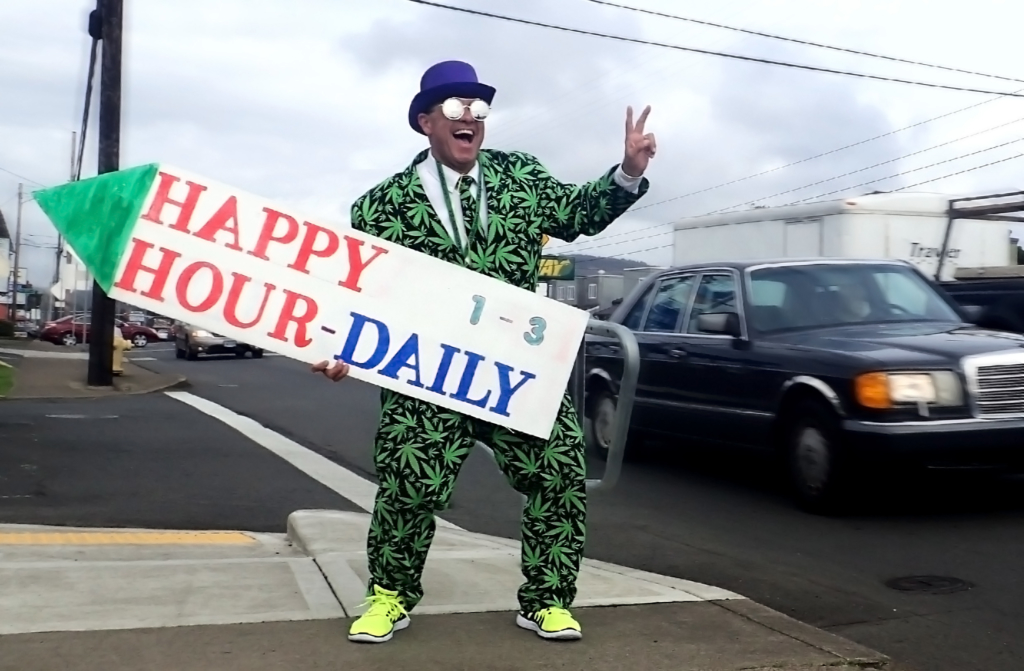 The Weedman’s hopes for a jury trial have gone up in smoke after pleading guilty last week to a stalking charge in Newport.

“My lawyer said, ‘Take the deal, dude’,” Eddie Biggar said Thursday. “Everybody knows I didn’t stalk her — and the only way they could get me off the corner was to lie.”

Commonly known as “Weedman” for his animated, placard-flipping promotion of marijuana sales, the 53-year-old Toledo resident pleaded guilty Friday to a charge arising from a complaint made in July 2018 by Simply Design Studios owner Sharon Biddinger.

Biddinger said Biggar caused her to fear for her safety and the safety of her employees due to repeated, unwanted and alarming contacts at her business at 460 North Coast Highway, Suite A, in Newport.

“They said if I plead guilty I would have to do 60 hours of community service and pay $500,” Biggar said. “I would have six months to do this, and, if I plead guilty, it will all go away like nothing ever happened. So, I said, ‘How about 30 hours?’ and they said, ‘OK.'”

At the time, Biggar was working for the marijuana dispensary CannaMedicine, across Highway 101 from Simply Design Studios. According to Biggar, he was “doing his job” spinning a sign advertising $5 grams of marijuana when Biddinger told him he couldn’t advertise in front of her business because she had families and children as clients. 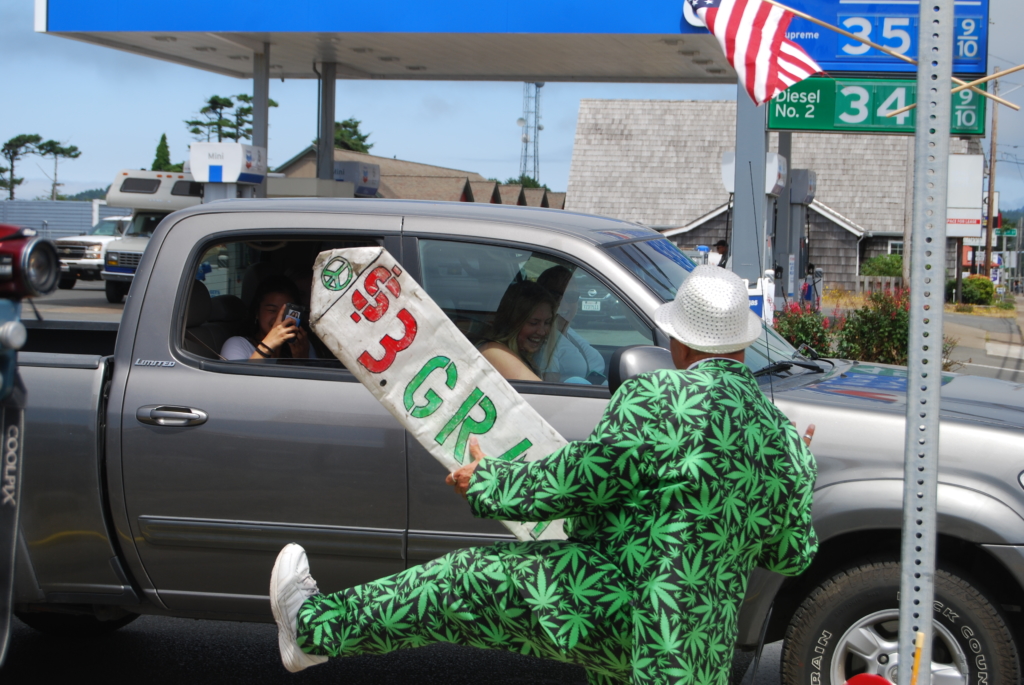 I met with Biddinger on September 7″, 2018, where she showed me surveillance footage from her business and screenshots of posts Biggar had made on his social media (Facebook) account about Biddinger, Biddinger’s husband and her business. Biddinger provided me with 71 videos/photographs for Biggar outside of her business (she had many more).

Biddinger went through some of the videos with me, showing where, for example, she was walking out to her vehicle and Biggar leaves the sidewalk and walks behind her. After Biggar passes behind Biddinger, he turns around and heads back to the sidewalk. Biddinger said he didn’t make any contact with her, but she felt his sole motivation was to intimidate her.

She showed me videos where Biggar would stand outside and just stare into her shop and where he will drive through the parking lot for no apparent reason and just stop and stare into her shop. She also told me she has been receiving telephone calls from unknown persons with “blocked numbers” and that people have been leaving bad reviews of her business because of her “relationship” with Biggar.

She further stated she had screenshots of Biggar’s followers on Facebook saying that they were going to leave a bad review of Biddinger’s business and that Biggar would do nothing to dissuade them from doing that, even going so far as to “like” the comment.

On 7/29/18, Biddinger called the Police because Biggar was outside her business windows. She described his actions as antagonizing her and her staff by pointing at them and yelling while he twirled his sign. She said he was disruptive. She called the Police and Officer Steve Hallmark responded. She reported the incident to Officer Hallmark, and relayed that her video system caught Biggar sitting on her business stairs on 7/17/18.

Officer Hallmark trespassed Biggar from her location and told him not to contact Biddinger. Biddinger has surveillance video of Biggar on the sidewalk, with his advertisement sign. He was seen singing and dancing. He could also be seen pointing at Biddinger’s business and waiving while he danced up and down the sidewalk.

On July 30″, 2018, Jerry Biddinger, Sharon’s husband, confronted Biggar about his behavior on the sidewalk in front of Simply Design Studios. This contact was recorded by Biddinger’s surveillance cameras, Sharon’s cellular phone and Biggar’s cellular phone. Jerry was visibly upset and stated some incorrect things in regards to the law, but then began to walk away.

Biggar, who began recording the incident after it started, re-engages Jerry in an argument, before repeatedly telling Jerry to “leave me alone”, as if he (Biggar) was being harassed by Biddinger. Biddinger told me that she became so afraid for hers and her employees’ safety, that she shut down her business office on July 30 due to the constant activity of Biggar and others defending Biggar.

Biggar’s Facebook post I located a video that Biddinger had posted to her social media account (Facebook) explaining to her clients that she needed to close her shop for undisclosed reasons and appreciated their support.

On Biggar’s Facebook account, I located at least nine separate times that Biggar posted or reposted the video Biddinger made from 12:30 p.m. to 7:55 p.m. Each time he would post comments rebutting her statement or “Hash tags” such as “#Cannibigotry” and “#simplydesignstudios”.

Biddinger said she blocked Biggar from her business and personal social media accounts; however, he had created another page and “liked” one of her images. Biddinger said she was not sure if he was just “creeping” on her page and accidentally liked a post, or if he did it as a message that he was still watching her and that she could not block him.

In response to the video, Biggar posted of he and Jerry Biddinger’s altercation on July 30″, 2018 a subject named Sid Walker comments:

“Wow what a punk. What kind of business is it? Need to know where not to shop”.
Biggar: “#theweedman thank you Sid”.
Walker: “What does the guy sell? Not you”
Biggar: “Sid Walker SIMPLY DESIGN studios”
Walker: “Photography? Or music studio?”
Biggar: “They’re on fb”
Walker: “Ah ima give them a baf (bad) review (two crying/laughing face emojicons)”
Biggar: “Sid Walker prayers”.

On November 5″, 2018, Biddinger called police to report that Biggar was in violation of the stalking order by being on the east side of Highway 101; however, he was found to be more than 150 feet away from the business and no action was taken at that time.