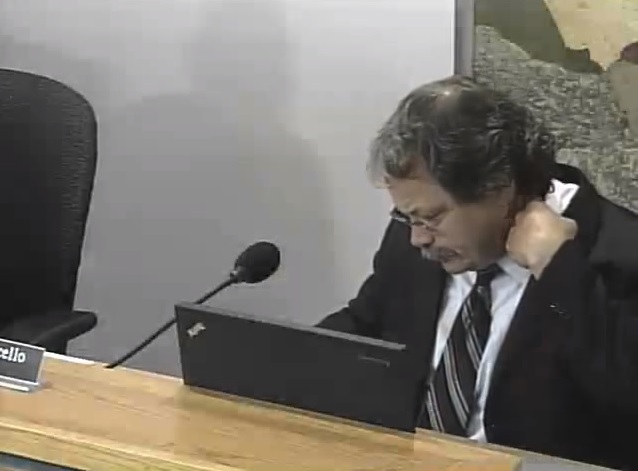 Lincoln City City Attorney Richard Appicello was the subject of a complaint raised by a subordinate in April 2017, according to multiple sources, who spoke on condition of anonymity, as they were not authorized to speak publicly.  The alleged victim had worked under Appicello for several years, but her employment was terminated shortly after the allegations were raised.

The alleged victim claimed Appicello made inappropriate comments to her regarding her clothing and shoes.  She claimed he showed her inappropriate artwork in his home.  She said his shirt was undone at times, exposing his chest and stomach, and she described feeling ogled by him.  As a result, she said she felt uncomfortable being alone with him. She claimed other co-workers felt the same, as well.

In addition, the alleged victim voiced concern that Appicello talked about, and once pointed out to her, his desk gun, discussed buying ammunition, and mentioned a knife he kept in his backpack.  She said he is unpredictable, and loses his temper, slams doors, shouts while speaking, and berates fellow employees, including City Manager Ron Chandler, loud enough for others to hear.

The allegations may rise to the level of “sexual harassment,” as Oregon law defines the term to be unwelcome sexual advances, requests for sexual favors, or conduct of a sexual nature, that is directed toward an individual because of gender.  It can also include conduct that is not sexual in nature but is gender-related.

The Lincoln City Council held up to five private meetings to discuss disciplining Appicello, according to public records.  After the last meeting, on May 22, the city council voted to approve a “personnel action,” without providing specifics.  Prior to the vote, Mayor Don Williams testified “tonight, we fail to protect the powerless from the powerful.  The actions council takes tonight have violated open meeting laws, our own ordinances and state ethics law, and I will not participate in this vote.”  Oregon law allows city councils to hold private disciplinary hearings if a specific statute is cited, but only one of the five meeting agendas listed the statute.

One co-worker said the alleged victim “did such a great job here. It was wrong what they did to her” referring to the termination. Other co-workers also expressed support for the alleged victim, but none were willing to speak publicly, for fear of reprisal.

According to a 15-year veteran of the city, it is “common practice” for the city to have outgoing employees sign non-disclosure agreements (NDAs), and said Ann Marie, Gene Mason, Sue Ryan, and Vicki Young had signed them. The alleged victim may have signed one as well, before receiving a severance.

Appicello is no stranger to controversy. In 2015, Appicello drafted ethics charges against Mayor Williams, as well as spearheading both civil and criminal investigations of Williams, and Williams’ supporters, costing taxpayers over $72,000. The Ethics Commission and the Oregon Department of Justice threw out the cases, blasting Appicello as an “instigator,” and faulting him for failing to produce any evidence to back up his claims.

Today, Appicello’s income is over $197,000* a year, a 57% increase over his 2013 starting income of $125,500, according to public records. In Jan. 2012, Appicello took a $62,600 a year job as an assistant attorney for Hernando County, Florida, according to the local Hernando Tribune newspaper.  In Nov. 2010, Appicello abruptly quit as Ashland’s attorney, for unspecified “health reasons,” according to Medford’s Mail Tribune.

Widespread sexual harassment is now being exposed in all levels of government, including it being “the norm” in Salem, “pervasive” in Sacramento, and “among the worst” in the US House and Senate, where using NDAs to silence victims is common practice.

Mr. Appicello did not respond to a request for comment.

It is the policy of this news organization not to publish the names of victims who come forward with allegations of harassment, abuse, or rape.

This is a developing story. If you have any information, please email [email protected], or call/text 541.992.0321.  You can also message us using WhatsApp, Signal, or Telegram which are secure messaging apps for Android and iOS that use end-to-end encryption. If you work at City Hall, please do not use your work phone or email account. We protect our sources and will not publish your name, or any identifying information, without your explicit approval. Thanks for your help!

Don’t miss Is there a Weinstein Roaming City Hall?

*Special thanks to council member Dick Anderson for explaining the city attorneys budget.