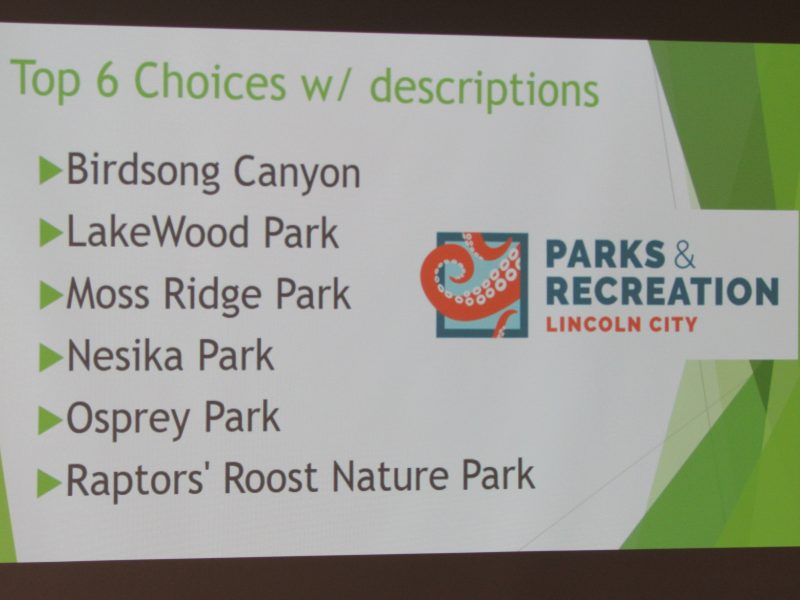 Parks and Recreation Ambassador LoRee LaFon organized the “Name Our New Park” contest and 83 entries were received and narrowed down to six names by City Manager Ron Chandler and Parks and Recreation Director Jeanne Sprague. The winner of the contest will receive a year-long pass to the Lincoln City Community Center.

Councilors will take the following principles into account while choosing a name:

Does the name engender a strong positive image?

Is the name appropriate with regard to the park’s location and history?

Does the name have historical, cultural or social significance for future generations?

Does the name commemorate places, people or events of continued importance?

Does the name have symbolic value?

Does the name have broad public support?

The park name finalists are:

This name would bring awareness to the number of bird species we have in Lincoln City and could encourage park visitors to learn about the birds they might hear or see while visiting the park.

LakeWood Park gives nod to the heritage of area. Adventure your own imagination in story and exercise your soul in Nature within the Parks beautiful wilderness.

Along the SE corner of this area there is a beautiful area of mossy hillside. Due to the wetlands to the south, there is a break in the canopy that allows the sun through to the forest floor. On summer days and (the rare) clear winter mornings, this offers a sunny, protected, and welcoming area for walking and mushroom foraging.

This is from the Chinook language meaning “Our Place” I think it is a PERFECT name for our new community park, celebrating the past and future.

Lincoln City hosts at least 3 nesting pairs of Osprey who return each year to rear their young. In the spring of 2019, the pair that has nested at the mall every year returned to find new light fixtures that would not hold their annual nest. After scouting the neighborhood, they built a new nest directly adjacent to the new park, across SE 3rd in the wetland on top of a tall tree. This pair, that mates for life, is now part of the park’s neighborhood, and the young are heard calling for their food for many blocks around as the parent’s fish from the lake. I would like to suggest naming the new park in honor of the natural setting and its other inhabitants who call this neighborhood “home.”

I believe there are several birds of prey that nest in that area: osprey, hawks, owls, etc. Hopefully the park will be built in a manner that protects their homes.

The naming of the park will bring an end to a six-month-long process but the city council does have the option to reject all the names, however, this scenario is unlikely.

Lincoln City was the first city in Oregon to be funded for this park project via a grant from the National Recreation and Parks Association and the Disney Corporation.